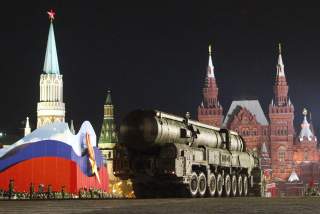 Russia is claiming that its Avangard hypersonic boost-glide strategic nuclear delivery vehicle could be operational and sitting on alert as early as next year. Earlier, senior Russian defense officials had said that the weapon would soon enter serial production.

"After the first series of glide vehicles is produced and a controlling launch of a missile with this armament is carried out successfully, the Avangard complex may be accepted for service already in late 2018,” a defense source told the TASS news agency. “At the latest, it will be accepted for operation and placed on high alert in 2019."

Yuri Borisov, Russia’s deputy defense minister, had said earlier that the Russian Defense Ministry has already signed a contract to put the new weapon into production.

“The Avangard system that the president [Vladimir Putin] mentioned is well tested,” Borisov told the Russian language newspaper Red Star. “It came about through considerable effort, because temperatures on the surface of a combat unit reach up to 2000 degrees [Celsius]. It really does go through the air surrounded by plasma. Thus, the challenges involved in controlling and defending the system were considerable, but did eventually find resolution. Practical tests have confirmed the chosen approach’s feasibility. In fact, we have secured a contract for mass production of these systems. So this is no bluff, but a serious undertaking.”

The fact of the matter is that a weapon such as the Avangard is extremely technically challenging to develop and both the United States and China have struggled to master similar technologies. It will likely take Moscow sometime to perfect the Avangard, even if Russian efforts are more advanced than their American and Chinese counterparts.

The Russians insist that they are not bluffing–as Putin noted in his March 1 speech.

“For obvious reasons we cannot show the outer appearance of this system here,” Putin said during his March 1 speech. “This is still very important. I hope everyone understands this. But let me assure you that we have all this and it is working well.”

According to Putin, the Avangard can travel at speeds greater than Mach 20 at intercontinental ranges.

“In moving to its target, the missile’s gliding cruise bloc engages in intensive maneuvering – both lateral—by several thousand km—and vertical,” Putin said. “This is what makes it absolutely invulnerable to any air or missile defense system. The use of new composite materials has made it possible to enable the gliding cruise bloc to make a long-distance guided flight practically in conditions of plasma formation. It flies to its target like a meteorite, like a ball of fire. The temperature on its surface reaches 1,600–2,000 degrees Celsius but the cruise bloc is reliably guided.”

Time will, of course, tell if Russia does actually deploy the Avangard in 2019.