Russia Ships Arms to Fiji: What Will Be the Quid Pro Quo? 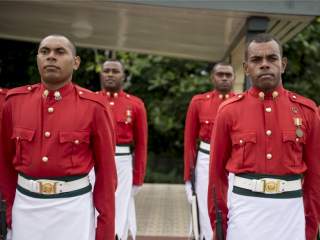 When the MV Saint Confidence and MV Solidat arrived in Suva Harbor last week to deliver a consignment of donated Russian weapons and equipment to Fiji, it sparked an immediate reaction. Opposition MPs and security analysts have made several claims including: the deal was clandestine, the weapons could potentially be used against Fijian citizens; and Russia’s increased engagement with Fiji is an opening move in a battle for influence in the Asia Pacific region.

The Russian arms deal was not secret but nor was it transparent. During Fiji’s Prime Minister Voreqe Bainimarama’s inaugural visit to Russia in 2013, five bilateral agreements were signed, including new protocols on military technical cooperation. At the time, Russia’s Prime Minister Dmitry Medvedev stated that Russia wanted to pay particular attention to assisting Fiji with its UN peacekeeping deployments. Bainimarama also referred to having secured Russian help for Fiji’s peacekeeping forces in the Golan Heights. In July 2013, the then Land Force Commander, Colonel Mosese Tikoitoga, announced that Russia had offered to arm Fiji's peacekeepers. That month also, Fijian Foreign Minister Ratu Inoke Kubuabola stated in the Russian English language press that Fijian peacekeepers would be issued with Russian-made individual combat gear that includes small arms. The details were still to be worked out and were subsequently never officially made known.

Which is why, when the Russians arrived bearing gifts last week, Ratu Isoa Tikoca, Fiji’s opposition spokesperson on foreign affairs and a member of the parliamentary standing committee on defense and foreign affairs, demanded the defence minister explain the consignment and discuss it in parliament.

So why didn’t the Fijian Government provide the parliament—and the public—with some information about the deal? The best time to have done so would have been in 2014, after the release of the Fijian peacekeepers captured by al Nusra Front in the Golan Heights. The incident highlighted the impact that Western sanctions imposed on Fiji in 2006 had on the Royal Fijian Military Force, reinforcing earlier concerns around military equipment resupply and modernization. The government could have rode the wave of national relief when the soldiers were freed by announcing that Fijian peacekeepers would in the future be better equipped with Russian weapons and kit.

The lack of transparency around the deal has led to some extraordinary and unhelpful comments being made in Fijian and foreign media. These include Tikoca claiming that the weapons deal will enable Bainimarama to control the south-west Pacific. Other analysts have suggested that the weapons, being dual usage, could also be used as crowd control on the local population. The recent delivery from Korea of riot control gear, including tear gas and anti-riot weaponry, to the Fijian Police and prisons has led to some confusion between the two consignments and further fed concerns about internal security.

So, is the Russian deal an indicator, as some analysts have suggested, of Fiji’s pivot away from the West?

Arguably, that pivot occurred around the time Bainimarama took power in a military coup in 2006 and Australia, New Zealand and the United States imposed sanctions. Russia’s equipping of Fijian peacekeepers is as a result of Fiji pursuing non-traditional friends in the face of international sanctions and, as one analyst has suggested, an attempt to diversify patrons and prevent dependence on China. Perhaps. China is rumored to be a potential donor towards the completion of the Blackrock Integrated Peacekeeping Centre. But Russian troops are far more battle experienced than the PLA, especially in regards to terrorism, and a benefit of Russian weaponry is the ready availability of Russian ammunition in the Middle East.

When sanctions were lifted, there was a clear expectation on the part of Washington, Canberra and Wellington that Fiji would come in from the cold and relations would go back to how they were. A series of high level visits by Western powers in December 2014 revealed how out of step the West had become with Fiji. The billboards around Suva depicting the Chinese President Xi and Indian Prime Minister Modi during their respective visits were visual reminders that, during the sanction years, Fiji had built new strategic partnerships. What this means for military-to-military cooperation is that there is a whole new cadre of RFMF officers who received their staff course education in Russia, China or India, for example, and have no ties to Australia and New Zealand; a point lamented by former senior RFMF officers. These officers have built their careers on these new relationships and this has changed both the culture and the trajectory of the military. As a consequence, Australia and New Zealand’s strategic relevance to Fiji has diminished.

Relations between Suva and Moscow intensified in 2013 following Fijian Prime Minister Voreqe Bainimarama’s inaugural visit to Russia (from 2011 there was a series of high-level ministerial visits, including Russian Foreign Minister Sergey Lavrov's visit to Fiji). In response to Lavrov’s visit, Australia’s then Parliamentary Secretary for Pacific Island Affairs, Richard Marles, accused Russia of cheque-book diplomacy. Marles was referring to Moscow seeking the support of Pacific Island states for recognition of Georgian breakaway states South Ossetia and Abkhazia. This is a far cry from the cheque-book diplomacy practiced by China and Taiwan, when they were bidding for recognition in the Pacific, but it does demonstrate that the contests on Russia’s borders (both old and new) have reached the South Pacific.

In 2014, to mark forty years of diplomatic relations between the two countries, Fijian Foreign Minister Ratu Inoke Kubuabola stated: “Russia is emerging as one of Fiji’s significant partners in its pursuance of its Look North policy.” Lavrov responded, writing that “deepening interaction with the island nations of the South Pacific is an integral part of the Russian agenda in the region.” This agenda is part of Russia's proposal for a new regional architecture to ensure equal and indivisible security in the Asia Pacific which Lavrov promoted at the 2013 East Asia Summit.

Aside from diplomatic support, what more does Russia want from Fiji?

Russia is clearly set on restoring its maritime power. In 2013 Rear Admiral Sergei Avakyants, Commander of the Pacific Fleet announced that Russia would begin a naval buildup in the Pacific Ocean the following year including a strategic nuclear submarine presence. In 2015 the first of four Borei-class nuclear-powered ballistic missile submarines joined the Pacific Fleet. Russian Navy Commander-in-Chief Viktor Chirkov stated in 2015 that the deployment of Russian ballistic and multipurpose nuclear submarines on operational duty in the Pacific Ocean has increased almost 50 percent over the previous year.

Not surprisingly, analysts are speculating that the next logical step to Russia’s increased submarine activity in the Pacific is a submarine fleet support base in the South Pacific.

Next month the twenty-five containers stored at Queen Elizabeth Barracks in Nabua will be opened and Russia’s gift unveiled. We suspect we will have to wait much longer to find out whether that gift has a price.

Anna Powles is a Senior Lecturer in Security Studies at Massey University and the editor of the United Nations Peacekeeping Challenge (Ashgate: 2015).

Jose Sousa-Santos is a senior strategic and security analyst and an IHS Jane’s contributor on Asia Pacific security matters. He is a former analyst with the United Nations Joint Mission Analysis Centre and is currently researching the nexus between terrorism and transnational crime in the Asia Pacific.

This article first appeared the Interpreter.