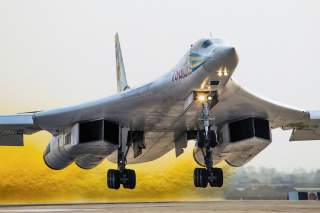 Russia has started test flying the first “new” Tupolev Tu-160 Blackjack supersonic strategic bomber. However, this first airframe will primarily be used as a flight sciences test aircraft—it is not a fully equipped mission capable strategic bomber. Moreover, this particular airframe was likely assembled from parts that were originally built during the Soviet-era.

"The 804th plane made using Soviet aircraft breakthroughs took to the skies for the first time last week and has been performing evaluation flights since then,” a Russian Defense Ministry source told the TASS news agency. “The missile-carrying aircraft will be delivered to the Aerospace Force until the end of this year."

This first “new” Tu-160 will be used most to glean additional flight test data—which is essential for building fully-mission capable aircraft later.

"The plane underwent only small-scale upgrade while its airframe and the engines have remained the same,” the source told TASS. “Fully digitalized documentation on the new missile-carrying aircraft will be issued no sooner than the middle of this year and the work on building the Tu-160M is impossible without it."

The Russians will likely build about 50 of the new Tu-160M—production versions of which will feature new avionics and upgraded versions of the Kuznetsov NK-32 afterburning turbofan. In the short term, Russia will buy an initial batch of 10 aircraft.

"A contract for ten aircraft is to be signed shortly," Russian President Vladimir Putin told workers at the Gorbunov Aircraft Plant in Kazan. "Each jet will cost more than 15 billion rubles [$ 0.27 bln] and the overall contract will total 160 billion rubles. This means the factory will be operating at full capacity through 2027. There will be plenty of things to do."

The Russian expect the addition of the upgraded Tu-160M2 into the arsenal will improve the capability of their nuclear triad. "It is a serious step to advance the development of the high-tech industry and strengthen the country’s defense capabilities, because it is one of the elements of our nuclear triad," Putin said.

Moscow can make do with the upgraded Tu-160M2 for its strategic bomber force because unlike the United States Air Force, the Russian Air Force does not expect the massive aircraft to penetrate into enemy airspace to deliver its payload. Instead, the Tu-160—which is capable of speeds of over Mach 2.0—would dash into position to launch long-range standoff cruise missiles. As such, stealth is not considered to be particularly important. Indeed, one of the advantages of a highly visible strategic bomber is that it enables nuclear signaling.