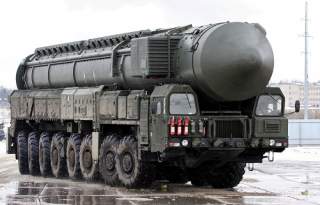 Russia may increase the size of its nuclear arsenal, a senior Russian official revealed on Friday.

Speaking at the 2015 Nuclear Non-Proliferation Treaty conference in New York, Mikhail Ulyanov, the Director of the Department for Non-Proliferation and Arms Control at the Russian Foreign Ministry, said that Russia may be forced to increase the size of its nuclear arsenal in response to provocative U.S. actions.

Noting that the United States and Russia have drastically reduced the size of their respective arsenals in recent years, and that the United States has proposed reducing their arsenals by another third, Ulyanov stated “U.S. actions have led to the appearance of completely contradictory factors which, in some circumstances, may even push Russia to begin increasing [its nuclear arsenal]."

The official elaborated on the alleged U.S. provocations, which included: “U.S. missile defense program, the U.S. refusal to negotiate on the ban on weapons in outer space, the U.S. military's Prompt Global Strike (PGS) system, Washington's de facto refusal to ratify the Comprehensive Test Ban Treaty, and the serious imbalance in conventional weapons in Europe.”

Ulyanov clarified that Russia wasn’t currently actively considering increasing the size of its nuclear arsenal, but such a move would have to be considered should America’s action remain unchanged.

Since the end of the Cold War, the United States and Russia have slashed the size of their nuclear arsenals, from roughly 70,000 warheads at the height of the Cold War to less than 15,000 today. Of the 15,000 warheads in Russia and U.S. arsenals today, only about 3,500 are considered operational. The rest are in their inventories.

Still, despite the decline in numbers, nuclear weapons have arguably become more important in Russia’s national security since the end of the Cold War, thanks to its declining conventional military power. During the Cold War, for instance, Russia maintained a no-first use pledge when it came to nuclear weapons. By 1993, however, Russia had abandoned that pledge.

The 2010 update of the doctrine similarly stated:

“The Russian Federation reserves the right to utilize nuclear weapons in response to the utilization of nuclear and other types of weapons of mass destruction against it and (or) its allies, and also in the event of aggression against the Russian Federation involving the use of conventional weapons when the very existence of the state is under threat.”

Vladimir Putin has put a new premium on nuclear weapons since beginning his third term as president in 2012. Just months before taking power again, for example, Putin wrote an op-ed in Foreign Policy magazine in which he stated:

“We should not tempt anyone by allowing ourselves to be weak. We will, under no circumstances, surrender our strategic deterrent capability. Indeed, we will strengthen it.”

Since taking office, he has made good on that pledge by repeatedly holding snap nuclear drills to ensure Russia’s strategic deterrent would function properly during times of crisis. The United States has also accused Russia of violating the 1987 Intermediate Nuclear Forces (INF) Treaty, which banned all land-based missiles with ranges between 500 and 5,000 kilometers, when it deployed the Yars (RS-26) intercontinental ballistic missile.