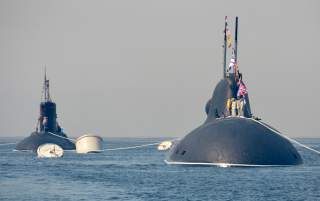 Russia plans to arm its most advanced nuclear submarines with hypersonic missiles by 2027.

The Husky-class attack submarines will be equipped with Zircon hypersonic missiles, according to Russian news organization TASS, which attributed the information to a source in Russia’s defense industry.

If true, this would be a marriage of two of the most formidable weapons in Moscow’s arsenal. The Husky-class is considered a fifth-generation submarine (just as America’s F-22 and F-35 are fifth-generation fighters, with construction of the first vessel scheduled for 2023–2024 and completion around 2027, according to Russian officials.

Details of the Husky are sketchy. Tass suggests the Husky “will feature a two-hull design traditional for the Russian Navy and displace 12,000 tons.”  Russian new site Lenta has speculated the Husky will be a multipurpose submarine that will come in three variants. The baseline model will be a hunter-killer sub of eight thousand to nine thousand tons armed with mines and torpedoes. There will also be a strategic-missile boat and a cruise-missile version.

The three classes will share common components. They may even share a common launcher capable of launching ballistic or cruise missiles. In effect, Russia has opted for an underwater equivalent of America’s F-35, with economy of savings by fielding variants of a single platform.

The Zircon missile has become something of a bogeyman among Western navies: with a reported speed of Mach 5 to Mach 6 (Russian media has suggested Mach 8 or even Mach 10). This has led to fears that it is too fast to be stopped by Western shipboard anti-aircraft defenses. Even the Royal Navy has voiced concern that the Zircon can't be intercepted by the Sea Ceptor air-defense missiles—designed to intercept targets traveling up to Mach 3—on Britain’s new Queen Elizabeth-class carriers.

However, the U.S. weapon is part of the Conventional Prompt Global Strike program, which aims to hit any target on Earth with a conventional missile that moves at the speed of an ICBM, without the nuclear escalation risks of a real ICBM. The Zircon appears to be more of a tactical weapon with a range of about five hundred miles.