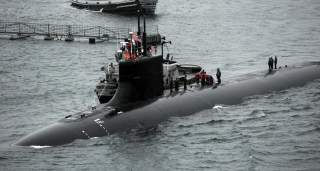 A crew member of a Russian nuclear submarine says his vessel tracked a “foreign” submarine for days in Arctic waters without being detected in what’s described as a record feat for Russia’s navy.

“From the [moment] first contact with the foreign submarine happened, it lasted for several days and that was a record for the navy in terms of tracking,” Aleksandr Brazgun, the crew member of the Akula-class nuclear-powered attack submarine, said in an interview last week with TV channel Zvezda. The station is operated by Russia’s Defense Ministry.

The story is the latest in an escalating propaganda war between Russia and the West involving military moves in the Arctic region.

The Independent Barents Observer, in picking up the story, says the nationality of the foreign sub wasn’t disclosed. But it is believed to be a NATO submarine. The sailor’s interview comes amid reports that US and allied submarines have stepped up activities near the Arctic Circle in response to rising tensions with Russia.

The USS Connecticut and the USS Hartford, two US nuclear attack submarines are currently conducting joint exercises near the North Pole with a British Navy Trafalgar-class submarine, HMS Trenchant.

In a separate interview posted by TV Zvezda on Friday, the commander of an Akula-class submarine flotilla, Sergey Starshinov, alluded to a voyage by another Russian sub to the East Coast of the US. Starshinov said the submarine sailed unnoticed close to an unnamed US military base.

“This is our objective. To come and go undetected,” Starshinov reportedly said. But he noted the submarine didn’t violate US territorial waters.

The US, Russia and China are stepping up their use of submarines, drones, sensors and other undersea military technology. This is making the security of assets such as undersea internet cables and coastal military facilities an area of growing concern.

In one publicized incident in late July, the US Naval Station at Norfolk, Virginia was put on lockdown after sailors saw what they thought was a trespassing scuba diver.

Norfolk is the home port of the USS Gerald R Ford, the US’s most advanced aircraft carrier. The incident reportedly occurred after the carrier returned from testing new technology that launches and lands jet fighters.

The sighting was ruled unfounded after an intensive search of the base.