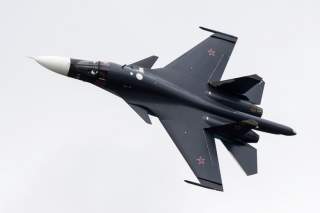 The Russian air force has started its air campaign in war-torn Syria against rebel forces around the city of Homs. But the scope and duration of the Russian air campaign is an open question. The Russian force of 32 fixed-wing combat aircraft at its airfield in Latakia is not large enough to sustain a prolonged air war.

“It's a token force, but they do seem problematic for our anti-Assad stance,” one Air Force told me. “Putin is clearly a pro-Assad guy. So it will be interesting to see whether the Russians attack U.S.-backed anti-Assad groups.”

The initial Russian airstrikes do seem to have been directed against Syrian rebels seeking to topple the Assad regime rather than ISIS forces. But it is not clear if those were U.S.-trained rebels or not. Nonetheless, the strikes do suggest that Russian president Vladimir Putin is seeking to shore up the beleaguered Assad regime against both the rebels and ISIS.

Earlier in the day, the Russian Federation Council gave its consent to using force in Syria. “The Federation Council unanimously supported the president’s request—162 votes in favor [of granting permission],” Kremlin chief of staff Sergey Ivanov told ITAR-TASS on Sept. 30.

Interestingly enough, according to Ivanov, the Russian campaign is solely directed against ISIS rather than an attempt to bolster Assad’s beleaguered forces. “The operation’s military goal is exclusively air support of the Syrian armed forces in their fight against the IS [Islamic State],” Ivanov told the Russian media. Ivanov added that the Russian operation is of limited duration, which seems to be consistent with the relatively limited size of Russia’s expeditionary force in Latakia.

What Can Russia Actually Do?:

While much of the media attention has focused on advanced Russian warplanes like the Sukhoi Su-30SM Flanker-H multirole fighter and Su-34 Fullback, U.S. Air Force officials note that there are only four each of those late-generation jets present in the theatre. Russia’s real combat power in the region comes from its force of two-dozen Su-25 Frogfoot close air support aircraft and Su-24 Fencer bombers.

Having four of each type would not allow the Russians to sustain airstrikes over a long period of time even with a well oiled logistical train comparable to the U.S. military. Thus the presence of the Su-30SM and Su-34 doesn’t add significantly to Russian combat power. “Combat turn patterns with four aircraft are not generally sustainable for long periods of time,” a senior U.S. Air Force official added.

Another recently retired U.S. Air Force official said, “Four jets might buy you eight to twelve sorties in a twenty-four hour period for a few days, but the pace wouldn't be sustainable,” the former official said. A typical squadron needs a minimum of six aircraft to sustain operations. “More likely they brought four to launch, plus two reserves—one spare and one in repairs.”

Russia’s real striking power in the region does not come from the advanced Flanker derivatives but rather the older and much less glamorous Su-25 Frogfoot and Su-24 Fencer. The Russian air force has a dozen of each type at Latakia, which could be used to sustain air strikes for a while—assuming Russia can sort out logistical, maintenance and spare parts issues. The Russian military has not conducted an overseas deployment like this in recent memory—and even then, the total Russian presence offers less combat power than an a single U.S. Navy carrier air wing.

While the Su-25 and Su-24 are still capable strike aircraft, it remains to be seen if the Russians have the ability to sustain those jets away from home. Further, it is not clear if the Russian aircraft are equipped with the types of sensors and precision-guided munitions required for this kind of a fight—and, moreover, if they have enough stocks of those precision weapons. There is also the unanswered question of how proficient Russian aircrews really are and if they will be working closely with ground controllers to identify targets for them. Only time will tell.