Russia's Airborne Forces Are Set For A Big Upgrade in Firepower 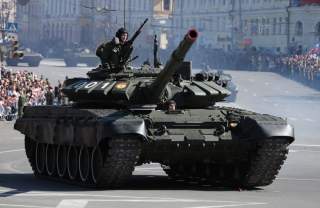 The Russian Airborne Forces (Vozdushno-desantnye voyska Rossii—or VDV) are set to form six armored companies equipped with newly modified T-72B3M (also known as the T-72B3 biathlon) tanks in the second half of 2016. Over the next two years, those six companies will be expanded to battalion strength.

“The Russian Airborne Forces will start setting up tank companies armed with T-72B3 tanks in the second half of the year,” a Russian defense ministry source told the Moscow-based TASS News Agency. “They will be expanded into tank battalions within the next two years.”

It’s not clear why the Russians are adding heavy armor to their elite Airborne Forces—which are a separate branch from the Land Forces. But the addition of the tanks will give the light mechanized force a massive boost in offensive capability on the ground. However, the problem for the Russians is that tanks like the T-72 cannot be airdropped. The paradox of heavy mechanized forces is that while they have great tactical mobility, they lack strategic mobility—meaning that they are hard to deploy away from their home bases.

The latest in the series is the BDM-4M infantry fighting vehicle. It packs an enormous punch with a 100mm low-pressure cannon, a 30mm cannon, a 30 mm AGS-30 grenade launcher, a 7.62 mm machine gun, a 5.45 mm RPK machine gun and Konkurs anti-tank guided missiles. The vehicle is protected by lightweight aluminum armor that is able to withstand 30mm cannon fire. All of that is packed in a vehicle that weights about 13.5-tons.

The BDM series is fully amphibious and air-droppable. It has a 500hp engine and can move at speeds of about 45 miles per hour. With a 37hp/ton power-to-weight and low ground pressure, it is extremely maneuverable. Moreover, the vehicle is designed to be able to fight from the moment it touches down after it completes a parachute landing—with the crew already onboard. There is no U.S. equivalent to the Russian vehicle.

But how the T-72B3M fits into the VDV’s order of battle is remains murky. The heavy tanks could not be deployed alongside paratroopers jumping into a combat zone. Nonetheless, it’s not unheard of for airborne forces to employ heavy armored vehicles.

During the Second World War, the Nazi-era Luftwaffe—which fielded the Fallschirmjäger divisions—created the Fallschirmpanzerkorps Hermann Göring. The panzerkorps eventually consisted of two panzer divisions that followed the same basic structure as the Heer (the army component of the Wehrmacht) and the Waffen-SS.

But it remains to be seen why the Russians chose to go this route. One possible explanation is that VDV troops are far better trained and more professional than the other Russian service branches. But that begs the question as to why they are not being equipped with the T-90AM or T-14 Armata.