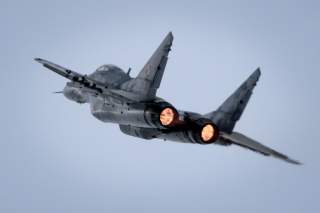 The Russian Navy’s sole aircraft carrier Admiral Kuznetsov is set to deploy to the Mediterranean Sea with a new air wing configuration. Instead of just the Sukhoi Su-33, Kuznetsov will deploy with a mixed air group with comprised of Flanker-Ds, Su-25UTG Frogfoots and the new Mikoyan MiG-29K Fulcrum-D.

“According to plans of the General Staff of the Russian Armed Forces, the Admiral Kuznetsov in September-October will enter the Mediterranean Sea, where it will become a flagship of the Russian Navy's grouping,” a Russian defense ministry source told the TASS News agency. “The aircraft carrier will have on board a mixed group of deck jets Sukhoi Su-33, Su-25UTG and Mikoyan MiG-29K.”

The carrier is currently at Murmansk, however its air wing will be practicing carrier takeoff and landing skills at training facilities in Saki, Crimea, and at Yeisk—which is on the shores of the Azov Sea. This is the new Fulcrum model’s first operational deployment in Russian service. The MiG-29K was tested onboard Kuznetsov in 2009—but has never deployed operationally with the Russian fleet.

The Indian Navy, however, operates a total of sixteen MiG-29Ks from the carrier INS Vikramaditya. New Delhi has ordered a total of forty-five Fulcrum-Ds to serve onboard Vikramaditya and the future INS Vikrant—which is set to become India’s first indigenous carrier in 2018. India might increase its MiG-29K/KUB fleet in the future as more carriers enter service.

The MiG-29K is a much-improved variant of the original Fulcrum. As a carrier-based model, it features a reinforced airframe and undercarriage to handle the shock of carrier landings. It’s also is fitted with folding wings and a tailhook. The airframe also features signature reduction measures to cut the jet’s radar cross-section by a factor of four.

The jet also features more powerful and fuel-efficient Klimov RD-33MK engines, which are fitted with full authority digital engine controls (FADEC). Overall, the new powerplants should be far more reliable and maintenance friendly than the older RD-33K. Unlike the original MiG-29, the new Fulcrum-D features a digital fly-by-wire system.

The new Fulcrums’ avionic suite is based around the Zhuk-ME pulse doppler radar, which can track up to ten contacts while engaging four targets simultaneously. It’s also fitted with a new multichannel infrared search and track (IRST) system. The avionics are based on the ubiquitous MIL-STD-1553B open architecture standard for easier upgrades. The aircraft is able carry a host of air-to-air and air-to-surface guided-weapons including the Kh-35E anti-ship missile.

Moscow has ordered two-dozen of the new jets to eventually replace the Su-33 in Russian Navy service. The aircraft should be delivered to the Russian fleet before the end of the year.