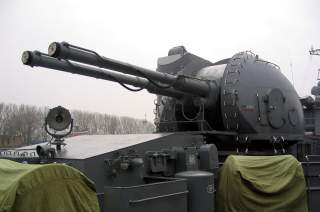 The AK-130 naval gun is one of the most formidable artillery pieces afloat today. However, it had a long and troubled development period, mostly due to the stagnation of Soviet shipboard artillery research and its massive weight. However, once fielded it proved itself to be an extremely rapid weapon, attaining rates of fire of upwards of sixty rounds per minute of 130-millimeter shells. But why did Soviet naval doctrine call for such a monster of a gun? Is it still relevant today?

The Soviet desire for an automatic large-caliber cannon began in World War II. Soviet gunners felt that the low rates of fire offered by 100–130-millimeter cannons of the era limited the effectiveness of such guns in the antiaircraft role. As a result, after the war, in 1952–55, various prototypes of automatic cannons that used the recoil energy to automatically cycle the next cartridge were designed. They were fed by multiple cylindrical ammo drums. Further guns of this type were meant to be developed and fielded in the shipbuilding program from 1956 to 1965; however, Nikita Khrushchev forbade the work on all shipborne cannons of a caliber greater than seventy-six millimeters in an order in 1957. Large-caliber cannons on Soviet ships remained slow and inefficient for almost another decade, lagging behind British, American, Swedish and Italian designs. Finally, in 1967 the order was given to begin work once more on automatic large-caliber cannons.

In 1969, the first design was ready under the factory index ZIF-92, a single-barreled 130-millimeter design. This gun contained many features that would later make it into the AK-130. The barrel was cooled by a thermal jacket that circulated seawater around it. It used the recoil energy to cycle new rounds, and had a sliding-wedge vertical locking block. Despite its innovative qualities, this design was too heavy to be installed on the Project 1135 line of ships, and thus had to be shelved.

The design was finally adopted as a dual gun mount, with the production name AK-130 in 1985, for the Sovremenny-class destroyer. Dual guns were used, as the single gun was unable to reach the targeted rate of fire of sixty rounds per minute. In this implementation, the AK-130 can fire eighty rounds per minute, at a rate of forty rounds per minute on each gun. This rate can be sustained from up to 180 ready rounds loaded in the turret magazine. Each round weighs seventy-three pounds, and can be shot out to a range of twenty-three kilometers ballistically. Realistically, it can shoot out to fifteen kilometers in the antiair role and eight kilometers in the antimissile role. The dual gun mount weighs around a hundred tons, with the ammo magazine checking in at forty tons; this makes the AK-130 as a complete system extremely heavy. For comparison, the 127-millimeter Mark 45 Mod 2 gun on American destroyers weighs only fifty-four tons for the complete system; however, it is a single gun mount with only twenty rounds loaded in the turret magazine. The AK-130 operated with radar direction and has a ballistic computer integrated with a laser rangefinder. Some shells it fires are equipped with remote and radar fuses, allowing them to effectively engage aircraft.

Those same features would make the AK-130 one of the best naval guns with which to defend a ship from a drone swarm. Its rapid rate of fire and massive shell size would provide unparalleled lethality, and the extremely large magazine would ensure its ability to stay in the fight. It also means it excels at roles such as ground support, and if allowed to get into range, it would prove devastating to any ship that it could get a firing solution on. While big guns are some of the oldest naval technologies, with such advanced systems like the AK-130, they continue to prove their usefulness in the modern era.