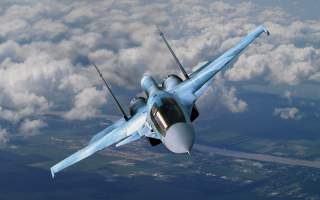 The Russian response to the Pentagon’s Third Offset Strategy has been to prioritize the development of tactical and strategic nuclear weapons argues a new report from the Institute of Defence and Strategic Studies (IDSS) at the Singapore-based S. Rajaratnam School of International Studies. But while the Kremlin is prioritizing the development of new nuclear weapons as competition in the conventional arms race speeds up, Moscow is also pursuing its own military innovations albeit on a smaller scale.

“Russian responses to counter these initiatives consist of two major elements: The first one is ‘countering the Third Offset Strategy with the First Offset Strategy’, which means prioritising the development of a wide array of both strategic and tactical nuclear weapons systems,” wrote Michael Raska, a professor at IDSS, and Vasily Kashin, a senior research fellow in the Institute of Far Eastern Studies in the Russian Academy of Sciences. “For Russia, maintaining a sophisticated arsenal of nuclear weapons can effectively offset conventional military innovations of the U.S., NATO, and China. The second element of the response strategy is more ambitious, and carries greater technological risks. Russia began to counter many U.S. technological initiatives via similar indigenous programs, although more narrowly focused and smaller in scale.”

Russian nuclear modernization has been extensive, with multiple programs designed to counter the nascent U.S. missile shield that is being erected in Europe. “Russia has been deploying the new RS-24 Yars (SS-27 Mod 2) ICBMs, and the new Borei class SSBNs armed with RSM-56 Bulava (SS-N-32) missile systems,” the authors write. “Simultaneously, however, Russia has been developing at least two additional ICBM families: a heavy liquid fuel Sarmat ICBM (RS-28) and a mobile solid fuel Rubezh (RS-26) system, specifically designed to defeat future U.S. missile defence shields in Europe. The development of a rail-based ICBM system utilising one of the existing ICBM types (most likely RS-24) has also started. Furthermore, Russia is working on the hypersonic reentry vehicles for its ICBMs. Another extensive programme is the development of a significantly upgraded version of Tu-160 Blackjack strategic bomber, which will be produced in Kazan. Moscow takes any possible threat to the effectiveness of Russian nuclear forces very seriously, and immediately embarks on planning countermeasures.”

Additionally, Russia has modernized its tactical nuclear forces—which include short-range ballistic missiles, gravity bombs, cruise missiles and even nuclear-tipped surface-to-air missiles. “In short, Russia’s programmes focusing on rearmament of the nuclear forces are progressing into advanced stages,” the authors wrote. “Russia already has a significant advantage over the U.S. in terms of the quality and variety of its delivery systems, and can reasonably ensure the strategic effectiveness of its nuclear forces in the near future.”

But Russia has not given up on conventional armaments and is researching many of the same technologies as the United States in its response to the Third Offset Strategy—but on a smaller scale, due to the Kremlin’s limited resources. “Russian technologies are at the early stages in some areas,” the authors wrote. “However, in other areas such as directed energy weapons, rail gun, hypersonic vehicle; unmanned underwater vehicle programmes are progressing into advanced stages.”

Long-term, the Russians are likely to focus on the following technologies:

-       Robotic and remotely controlled systems, including UAVs, as well as ground vehicles—combat, reconnaissance, logistical, which are currently undergoing vigorous testing

-       Introduction of the advanced command and control systems, including battlefield internet

-       Advanced long-range and ultra-long-range air defence and missile defence systems with ASAT capabilities, which will be used not just for air defence, but for gaining air superiority, offsetting the advantages of the Western adversaries

Notably, project like the gargantuan Lider-class nuclear-powered destroyer or new aircraft carriers are not on the list. That is because while the Kremlin’s state-owned media often focuses on outlandish propaganda, the authors note that Russian professional journals provide accurate information about Moscow’s strategies. Meanwhile, Western analysts and media generally ignore such information—possibly due to the language gap.

“It is important to understand the differences between the Russian defence policies as portrayed in the Russian mainstream media, the Russian defence policy described in the West, and the real Russian defence policy,” wrote the authors. “These three phenomena largely exist in three different universes, and are barely related to each other. The defence technology and military build-up programmes, which in reality will define the future Russian military and shape the strategic balance in the areas surrounding Russia, are almost never secret; they are well described in the statements by Russian defence industry officials and professional publications of the Russian defence experts. These programmes, however, are rarely given attention and consideration in the publications of the Russian mainstream media, which tends to focus on the high profile, but mostly unrealistic weapons concepts. These are mostly ignored in the West, where the prevailing perceptions portray Moscow as a resurgent global power that will challenge the United States and the West on all fronts worldwide.”

Ultimately, the Kremlin seems to be pursuing a relatively sensible strategy, given Russia’s technical and material resources.