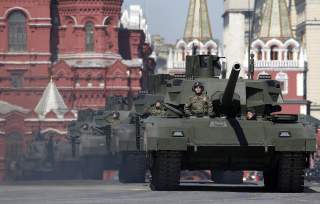 Russia is set to receive production versions of a host of new weapons system in its 2018-2025 state armament plan (GPV 2018-2025) including the new T-14 Armata main battle tank, the Su-57, a new bomber and other hardware.

“A special feature of the new armament program for 2018-2027 is the conversion of prototypes that are being tested into serial deliveries,” Russian deputy prime minister Dmitry Rogozin said on the Rossiya-24 channel according to the TASS news agency.

Rogozin seems to have misspoken since the next state armament plan is supposed to run from 2018 to 2025. Moreover, the English language version of the TASS report mistranslated серийные поставки—“serial deliveries” as “mass production” causing some confusion. In the Russian context, serial production and mass production are quite different.

“I think it's important to understand the Russian terms here, by serial production he does not mean mass production,” Michael Kofman, a research scientist specializing in Russian military affairs at the Center for Naval Analyses told The National Interest.

“He means that Armata will exit prototype phase and an accepted design will then be serially produced. This was always the plan towards 2021-2023. It is currently in three years of field trials.”

While the new state armament plan will likely fund some number of T-14s, the new tank will not be mass produced on the scale of earlier Russian and Soviet tanks.

“The GPV is expected to fund the serial production of an initial batch of T-14s sometime in the early 2020s, but not massive production since there is no clear need for this tank, nor is the funding there to procure it on a large scale,” Kofman said.

Under the Kremlin’s “New Look” reforms, the Russian military was revamped to focus primarily on local conflicts in the post-Soviet space. There is no clear need for such a vehicle to defeat any of the post-Soviet republics on Russia’s periphery. Nor is it clear that the T-14 is need to take on NATO forces.

“It’s not clear they need it for NATO either,” Kofman said.

“Probably more important is investment in gun design and ammunition along with getting panoramic thermal sights on all their vehicles. They're still quite short of the equipment that would allow hunter-killer tactics in armored combat.”

“In my view, the T-14 doesn't really answer many issues and in fact design-wise is not a good tank because of an empty turret,” Kofman said.

“The commander needs to be on top and get out of the hatch for situational awareness. Anyone with armor experience will tell you they don't want to be relying on scopes. Scopes will get shot out in combat and there is nothing like the awareness provided by looking on the battlefield from the turret.”

Ultimately, the Russian might find after their operational testers get hold of the Armata that it might be better to retrofit the T-14’s advanced technologies onto other vehicles—as is the case with the T-90M—but that the new tank itself is not particularly useful.

“I think Armata has a lot of innovation but the design is principally flawed,” Kofman said.