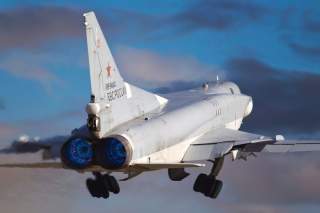 As before, the Tupolev Tu-160 Blackjack and Tu-95MS bombers played a prominent role, however, the supersonic Tu-22M3 Backfire bombers conducted the majority of the attacks. “A squadron of Tu-22M3 long-range bombers made airstrikes against 6 ISIS facilities in the provinces of Raqqah and Deir-ez-Zor. They engaged depots with weapons and ammunition, mass concentrations of military hardware, training camps and workshops producing explosives,” reads a statement from the Russian defense ministry.

That statement was later amended to add: “Just a few minutes ago a squadron of Tu-22M3 long-range bombers has made the second massive airstrike against 6 militants’ facilities engaging a communications centre, ISIS ammunition depot, a small factory producing explosives and car bombs, as well as a terrorist training base.”

While videos released by the Russian defense ministry shows that the aircraft were dropping OFAB 250-270 free-fall bombs, the aircraft were originally designed to strike U.S. Navy carrier strike groups in the Atlantic and high value NATO targets in Europe if the Cold War ever turned hot. There is no direct U.S. equivalent to the Tu-22M—the closest is perhaps the Rockwell International B-1B Lancer, which has been de-nuclearized in the post-Cold War-era, has a somewhat similar role. Another rough analogue might be the now retired FB-111 strategic bomber variant of the F-111 Aardvark.

The Tu-22M3 is the last version of the Backfire that is still in service. The aircraft was sold to the Soviet leadership as a derivative of the older and much less sophisticated Tu-22 Blinder—but the Tu-22M is a completely new design that shares nothing with it predecessor except for its designation. The Soviet military basically had to trick the Kremlin into funding the Backfire the same way the U.S. Navy convinced the U.S. Congress that the almost entirely new F/A-18E/F Super Hornet airframe was a derivative of the original F/A-18.

According to the Tupolev design bureau, the first Tu-22M0 prototype was completed in 1969. It made its first flight that year on August 30 with V.P. Borisov as the pilot in command. The first prototype of the current M3 version of the jet first flew on June 20 1977 with production starting in 1978. The last version of the Tu-22M3 became operational in March 1989 just before the collapse of the Soviet Union, according to Tupolev. The Kazan Aircraft Production Association built a total of roughly 500 different Backfire variants.

When the Backfire was introduced into service, it caused a lot of concern within the U.S. Navy because it is designed to carry a massive load of long-range anti-ship cruise missiles. The jet is fast—it has a top speed of Mach 1.88 and will easily sustain Mach 1.6 for extended periods—and carries 53,000lbs of weapons. Typically, that meant the Tu-22M3 could be carrying ten Raduga Kh-15 anti-ship missiles or three massive Raduga Kh-22 missiles—both of which can hit speeds of around Mach 5.0. The 13,000lbs Kh-22 was especially feared because of its long 320 nautical mile range and 2,200lbs shaped-charge warhead that could cripple an aircraft carrier with a single blow.

But it also carries conventional free-fall bombs—as many as seventy FAB-250-class weapons or eight FAB-1500-class weapons. A Russian ministry of defense video indicates that the Tu-22M3 dropped OFAB-250-270 bombs—basically 551lbs of blast fragmentation weapons—on Syria.  Dunarit—which manufactures the OFAB-250-270—helpfully points out the weapon “is intended for destruction of military-industrial sites, railway junctions, field facilities and personnel in open terrain as well as in light armoured vehicles and trucks on the march or during attack within the main concentration perimeter.”

The Tu-22M3 will eventually be replaced in Russian service by the PAK-DA or potentially even the Tu-160M2—which Moscow has stated will be reentering production in 2023. But that might not be the end of the road for the Backfire. There have been persistent rumors that China wants to buy the aircraft as part of its anti-access/area denial strategy—so it’s not inconceivable that we might see Chinese Backfires one day. Stay tuned…