Russia's Dangerous Nuclear Forces are Back 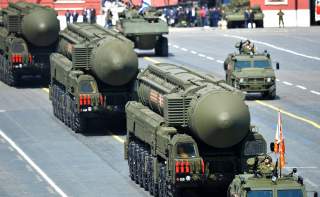 The United States is claiming that Russia has secretly deployed two battalions of land-based nuclear-tipped cruise missiles in violation of the landmark 1987 Intermediate-Range Nuclear Forces (INF) Treaty. According to the New York Times, U.S. officials claim that the Kremlin has deployed two battalions worth of SSC-8 cruise missiles—better known by its Russian designation 9M729—in the Kapustin Yar region.

The new cruise missile is likely part of the same family of weapons as the Kalibr-NK sea-based cruise missile. “I think the Kalibr and the 9M729 are all part of the same family,” Jeffrey Lewis, Director of the East Asia Nonproliferation Program at the James Martin Center for Nonproliferation Studies at the Middlebury Institute of International Studies at Monterey told me. “The Klub is a reduced range Kalibr like the R-500 is a reduced range 9M729. But the Kalibr and 9M729 are likely pretty similar—just like the Klub and R-500—look almost the same.”

The new development comes on the heels of another Russian nuclear development—the RS-26 Rubezh intercontinental ballistic missile ICBM. But while the RS-26 is technically an ICBM, its range falls just barely inside the ICBM category. In reality, as Lewis explains, the RS-26 is a direct replacement for the RDS-10 Pioneer—known to NATO as the SS-20 Saber—which was banned under the INF treaty. “It's the RS-26—exact same concept,” Lewis said. “It's an SS-20 clone.”

But why would Moscow violate the INF treaty?

Lewis ascribes the Kremlin’s moves to a failure of democracy to take root in post-Soviet Russia. “Old Soviet patterns are reemerging,” Lewis said. “That means the defense industry is, again, pushing all this crazy stuff with the help of the army and a political leadership that says OK. So we see a new heavy ICBM, a resumption of rail-mobile basing and that awful underwater drone.”

The Soviet and Russian military only grudgingly accepted the INF treaty at the end of the Cold War-era hostilities. Now, with permissive leadership in the Kremlin, the Russian forces are resuming their pre-Gorbachev-era nuclear posture. “The Russian military always hated the INF treaty,” Lewis said. “And without Gorby or (early) Yeltsin to tell them to stuff it, they are now getting their way. They probably believe that we are secretly violating the treaty and they need to screw us before we screw them. Which is very Soviet.”

The Russians will inevitably claim that the United States violated the INF treaty first with Aegis Ashore missile defense sites, which use the Mk-41 vertical launch system. The Mk-41 is capable of launching the Tomahawk cruise missile—which could be argued is a violation of the treaty. “As for the Mk 41, it’s kind of a [flimsy] argument,” Lewis said. “The Mk-41 is a launcher, right? So... The treaty prohibits ‘GLCM launchers’ and ‘GLBM launchers.’ The Tomahawk is permitted because it is a SLCM.

Moving the MK41 to land would be a problem if we then fired a Tomahawk off it.

But we've only fired SAMs out of it and the treaty contains an exception for SAMs. Then the Tomahawk would be a GLCM.  But it's not.”

The United States has offered to allow Moscow to inspect the Mk-41 sites to verify that they do not contain Tomahawks, however, the Russians have refused. “As a practical matter, the U.S. should—and in fact has—offered to let the Russians take a look and reassure themselves,” Lewis said. “Russians refused.”