Russia's Economy: What Do the Numbers Tell Us? 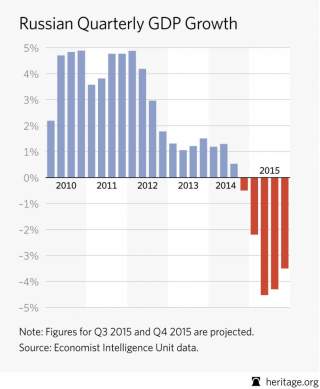 Before the Bolshevik revolution, Vladimir Lenin supposedly said “the worse the better.”  Essentially what he meant was that the more conditions deteriorated under the Russian czar (and in its aftermath) the more likely the Bolsheviks would obtain power. In this, Lenin was quite prescient.

Today, the Russian economy has fallen into a “worse” phase. The collapse in oil prices, coupled with economic sanctions, has significantly impaired economic growth.  The question is: How bad is it, and what are the future prospects for recovery?

In short, the prospects currently look dismal. Even a rapid and sustained resuscitation in energy prices is unlikely to restore growth to levels experienced earlier this decade.  Let’s glance at the numbers (see above for graph):

One striking fact is that Russian growth started to decline rapidly in 2012 Q1, well before oil prices fell or economic sanctions took hold. Growth had plunged to approximately one percent before either phenomenon occurred.

Russia’s 4 percent GDP growth rate was largely manufactured by enormous growth in consumer credit, which was not sustainable. The World Bank estimates that, by 2017, Russia’s real GDP will be smaller than it was in 2012.

The Russian economy is seriously dependent on energy. Approximately 70 percent of its exports are hydrocarbons, and 50 percent of government revenue comes directly from the oil sector. Given this addiction, the exchange rate has collapsed to 62 rubles per dollar (as of October 2015), compared with its average of 29 rubles per dollar for the 10-year period preceding last year’s decline. Over the last year, inflation has increased from 7.8 to 15.8 percent.

After being in surplus as recently as 2012, Moscow’s budget deficit is expected to run 4.5% of GDP in 2015. This is an enormous swing over a short period of time. According to Moody’s, the Russian Finance Ministry plans to pull more than 2 trillion rubles from one of its two sovereign wealth funds to cover the shortfall.  Finance Minister Anton Siluanov said Russia could exhaust both its funds in less than two years if it continues to rely on the reserves to balance the budget.

The Russian Central Bank Governor stated that international reserves stood at $370 billion in early October, down from last year’s high of $510 billion. After crowing about an investment-grade sovereign debt rating for several years, Russia saw both Standard & Poor’s and Moody’s downgrade its rating this year.

Meanwhile, consumption spending has fallen at its fastest pace since the 1998 crisis--contracting 7.5 percent in the second quarter. And the poverty rate has risen by two percent in just the last four quarters.  Twenty-two million Russians now live in poverty.

The economic sanctions imposed after the invasion of the Crimea peninsula have produced deeper damage than anyone expected. Strict sanctions from many western countries have prevented Russian companies from raising money in Europe and the United States and have also blocked arms trades.

The drop in the value of trade is indicative of the collapse in economic activity. During the first eight months of this year, imports have declined by 39 percent while exports have dropped by almost 30 percent.

Looking longer term, without deep and sustained structural economic reforms, Russia, now classified as a high-income country by the World Bank, faces a bleak future. Snow blanketed Moscow the first week in October.  Russians should prepare for a long winter.

As for that classic Lenin quote, it sparks the question: Will history repeat itself?  Russia had hoped to cut its defense spending—but given its campaign in Syria (and its earlier incursion into Ukraine), that has proved problematic. Vladimir Putin’s poll ratings are still high in Russia. But unless the economic fundamentals improve, such high poll numbers could be short lived.