Russia's FSB Will Soon Have Their Very Own Drones 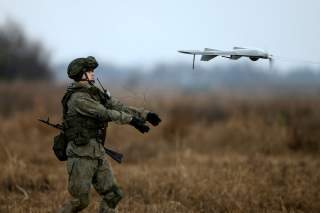 Russia’s Federal Security Service or FSB secret police—one of the successors of the Soviet-era KGB—are starting to develop their own unmanned aerial vehicles to gather intelligence.

“Efforts continue to put into operation the latest armament systems and technical means developed by departmental specialists and unrivalled in the world,” FSB chief Alexander Bortnikov told Rossiyskaya Gazeta according to TASS. “Work is underway to develop promising drones and systems for control of ground-and air-based robotic complexes, and also armored transport and fighting vehicles with the enhanced cross-country capacity, speed and protection.”

According to Center for Naval Analyses researcher Samuel Bendett, a specialist in Russian military robotics, it is no surprise that Russia’s intelligence apparatus is starting to take advantage of advanced unmanned surveillance systems. “This development is in line with Russia's increasing attention to domestic development of cutting edge systems such as drones and high-tech components,” Bendett said.

Nor is the FSB this first element of the Russian domestic security apparatus to utilize unmanned systems. “Russian security services like the recently-launched National Guard are outfitted with the latest technologies that enable them to complete their missions, be it surveillance or reconnaissance,” Bendett said. “Unmanned systems are becoming key components for any force that aims for rapid reaction and precise targeting.”

As such, it is only natural that Russia’s premier domestic intelligence (though it does not limit itself to domestic affairs) and security service would adopt unmanned systems. “FSB is a key component in Russia' domestic security, and it’s not surprising that its detachments will be operating their own unmanned systems,” Bendett said.

In time, all of Russia’s internal security and intelligence services will use advanced systems such as unmanned vehicles and robotics to perform their missions—just is in the United States. “At this point, it's a safe assumption that all of Russian security services such as National Guard or Border Guards or internal security will be operating their own drones for better situational awareness,” Bendett said. “This is similar to developments around the world, including U.S., where law enforcement entities are increasingly turning to unmanned systems to enhance their mission effectiveness.”

Moreover, while there is no publicly available documentation to prove it, Russia’s formidable foreign intelligence services, the SVR and the GRU, are both believed to have similar but capabilities fielded. “FSB has more of a force-like presence in the country  - there are offices and FSB branches in many towns and regions, and in times of emergency and crisis, they will probably act together with the National Guard,” Bendett said. “GRU and SVR are clandestine intelligence agencies that have to operate in secret—although, if they are involved in an operation like Syria where they are inserted into combat to assist local allied forces, they may operate a variety of technologies for better situational awareness that may include drones.”

The bottom line is that Russia’s formidable intelligence and security apparatus is starting to make use of unmanned and robotic technologies and will become even more formidable opponents in time.