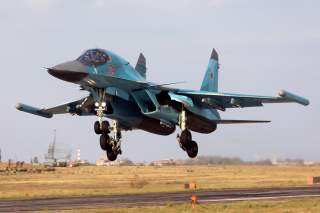 Russian forces in Syria appear to be using a mix of precision-guided munitions (PGM) and “dumb” unguided weapons over that war-ravaged nation.

While U.S. officials say that the Russian forces are dropping unguided weapons, Russian footage and imagery from Syria shows that at least some of the weapons being dropped are precision-guided. While it is impossible to independently verify what kind of munitions the Russians are using short of being on the ground in Latakia, there may be an explanation for the diverging narratives.

The first Persian Gulf War in 1991 is often regarded as the first precision-guided munitions (PGM) conflict (though laser-guided bombs made their debut in Vietnam). People around the world watched footage of laser-guided bombs precisely hitting target as small as a window in downtown Baghdad on CNN from the comfort of their own homes. At the time, that was unprecedented, but these days, of course that’s commonplace.

What is less commonly known outside defense and national security circles is that only a tiny fraction of the weapons used during Operation Desert Storm were precision-guided weapons. The overwhelming majority of the weapons used during the Gulf War were simple unguided dumb bombs. Out of all the weapons dropped by U.S. forces, only about nine percent were precision-guided munitions according to the Pentagon’s Gulf War Airpower Survey.

More than half of the PGMs used during the Gulf War consisted of Tomahawk cruise missiles, B-52-launched AGM-86C Conventional Air Launched Cruise Missiles (CALCM), AGM-65 Mavericks, AGM-88 HARM anti-radiation missiles and the AGM-114 Hellfire anti-tank missiles according to the document. Laser-guided bombs—which most people saw working their magic on T.V.—accounted for less than half of that total, yet they caused about three-quarters of the damage to the most important Iraqi targets.

In the years since then, U.S. forces have greatly increased the percentage of PGMs used during the various wars of the past twenty-five years—particularly since the introduction of Joint Direct Attack Munitions (JDAM). The JDAM—which is a Boeing-built kit—enables U.S. forces to rapidly convert general-purpose bombs into all-weather PGMs at relative low cost. The JDAM—and other weapons like it—have enabled the Pentagon to move to a situation where more than eighty percent of the weapons dropped by U.S. forces are PGMs.

The Russian are might be in a situation where they only have a relatively small stock of PGMs available. Moreover, the Russians might not want or even be able to afford to use up their PGM stockpiles in Syria. Indeed, U.S. allies in Europe were running critically short of PGMs during the 2011 Libya campaign—which was a very limited campaign against a relatively primitive enemy. Even the U.S. military has run low on certain types of PGMs at times given the ridiculously high ops-tempo that the Air Force, Navy and Marine Corps air arms have seen over the past two decades.

Thus while the Russian have been seen deploying weapons like the KAB-500 and KAB-250—which comes in laser, electro-optical and satellite-guided variants—on their Sukhoi Su-34 Fullbacks or the Kh-29 and Kh-25 on the Su-24 Fencer and Su-25 Frogfoot, the Russians might be using those weapons sparingly for reasons known only to them. Similarly, the air-superiority oriented Su-30SM Flankers have not been seen carrying the R-77 active radar-guided air-to-air missiles in Syria but rather the older less-capable R-27 missile.

But relying on unguided dumb bombs means that accuracy necessarily suffers and the risk to the pilots flying those missions increases. “The nice thing about precision weapons is you don’t have to be as good as with general purpose bombs/weapons,” a senior naval aviator told me. “Laser-guided bombs and GPS-enabled weapons make delivery much simpler.”

Indeed, as the Gulf War Airpower Survey notes, manual bombing without precision-guided weapons work best at altitudes below 10,000ft above ground level. But while accuracy is increased when flying below 10,000ft, aircraft operating at those altitudes are vulnerable to ground fire for guns—even small arms—and man-portable surface-to-air missiles. Above that, even at altitudes between 10,000ft and 15,000ft accuracy suffers greatly even as survivability is greatly increased as the Pentagon discovered.

The Russians are likely facing that same dilemma in Syria. But then in previous years, Russian forces have not shown much concern about causing collateral damage even domestically inside Russia itself. Russian forces more or less flattened the city of Grozny during the various conflicts in Chechnya. It’s not likely that the Russians hold Syrians in higher regard.