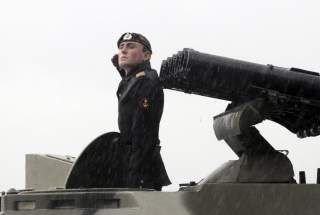 Russia is beefing up its amphibious assault capabilities with new ships and possibly even new armored vehicles.

The Severnoye Design Bureau is designing a large amphibious assault ship for the Russian Navy, according to Russia’s Tass news agency.

“The effort envisages starting work from scratch to create a large amphibious assault ship with a displacement of around eight thousand tons rather than developing some existing project,” Tass said, citing an anonymous defense official.

The first modern large Russian amphibious assault ship, the six-thousand-ton Ivan Gren, was laid down in 2004. Because of technical problems, it is only now being accepted by the Russian Navy this month.

The problem is that while existing Russian BMP and BTR armored troop carriers have some amphibious capability, it's not sufficient for a specialized amphibious force like the Naval Infantry. Russian doctrine calls for launching vehicles from ten to twenty-five miles offshore, with the vehicles themselves sufficiently armed to provide covering fire for the troops.

This requires a vehicle that can move through the water at twenty-five miles per hour, instead of the six miles per hour of a BMP or BTR, and can survive five-foot waves. “Standard BMPs and BTRs of the Ground Forces and Airborne Troops are amphibious, but spending prolonged periods in seawater causes electronics to fail and surfaces to corrode,” notes the U.S. Army’s OE Watch, which analyzes foreign defense news. “A related problem is over-the-horizon operations, as existing platforms were only designed to cross small bodies of water (rivers, lakes, etc.) and were not intended for prolonged amphibious operations, such as those conducted when landing ship docks launch amphibious vehicles for over-the-horizon operations.”

In response, Russian industry is pitching the BMMP, a heavily armed, tracked naval infantry infantry fighting vehicle like the BMP used by the Soviet and Russian armies.

Russian media has released what apparently are the first public images of the proposed BMMP design, which would weigh thirty-five tons, and have a land speed of about forty-five miles per hour and a water speed of twenty-two miles per hour. It would have a crew of three, carry up to ten naval infantry, and would be armed with cannon and anti-tank missiles as well as the Arena active protection system.

But whether this vehicle will ever see the light of day is another question. “Although the BMMP has been designed, its prospects for full scale production are speculative at best,” concludes OE Watch. "Russia is also experimenting with a naval infantry variant of the Bumerang BTR, which is somewhat less capable, but very close to serial production. A likely explanation for BMMP marketing materials now surfacing in the media deals with the manufacturers. The BMMP would be manufactured by the UralVagonZavod (of the ROSTEC Concern and Armata fame), while the Bumerang is manufactured by (occasional) competitor the Arzamas Machine Company. Russia is unlikely to field two systems with such similar capabilities, so it is likely that UralVagonZavod is trying to compete with Arzamas for the Russian Naval Infantry’s business, or is attempting to gain visibility of the platform on the export market."

Interestingly, the Tass article took care to point out that until now, all previous Soviet and post-Soviet amphibious assault ships had been designed by the Nevskoye Design Bureau, “the sole design bureau in present-day Russia that specializes in aircraft carriers and amphibious assault vessels.” The article also noted that other than Severnoye, “other design bureaus are not involved in this work.”

Either way, it appears the Russian Naval Infantry shouldn't hold its breath for a new armored vehicles. Perhaps they do share something with the U.S. Marine Corps: they are never first in line for new equipment.