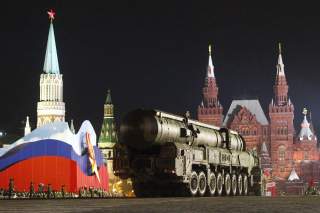 Russia’s massive 200-ton RS-28 Sarmat heavy liquid-fuelled intercontinental ballistic missile is set to become operational by 2021. Production of the weapon is expected to start in 2020.

“Under the government-run program for armaments extending till 2027 Sarmat is to be produced serially starting from 2020,” a defense industry source told the TASS news agency. “The first regiment armed with this missile is to enter duty in the Uzhur-based division."

The weapon does not appear to have started testing yet, but the comments from the TASS source appear to somewhat contradict previous comments from other Russian officials.

"It will be too early to expect Sarmat to begin batch-production within a year or two. But several pre-series missiles will enter duty in the near future," former Russian air force commander, Viktor Bondarev, chairman of the Federation Council’s defense and security committee, told Russian media according to the TASS news agency.

Bondarev had also said that the new missile would reuse a lot existing facilities.

“It owes effectiveness to many factors, such as high accuracy targeting of the warheads, the ability to penetrate any missile defenses, an unlimited range of hitting targets, a large number and high yield of warheads and the capability to carry a wide range or nuclear warheads, including hypersonic ones," Bondarev said. "Besides, the commission of Sarmat will be cost-effective [a very rare quality for a new product], because the intercontinental missile can be deployed in the existing silos, with minimum amendments done to the infrastructures.”

Russian President Vladimir Putin said that the Sarmat weighs over 200-ton—though analysts doubt that number. Many analysts believe the weapon is roughly a 110-ton missile that is more a direct replacement for the SS-19 Stiletto than a Satan replacement.

“Weighing over 200 tons, it has a short boost phase, which makes it more difficult to intercept for missile defense systems,” Putin said on March 1. “The range of the new heavy missile, the number and power of its combat blocs is bigger than Voevoda’s. Sarmat will be equipped with a broad range of powerful nuclear warheads, including hypersonic, and the most modern means of evading missile defense. The high degree of protection of missile launchers and significant energy capabilities the system offers will make it possible to use it in any conditions... Voevoda’s range is 11,000 km while Sarmat has practically no range restrictions...It can attack targets both via the North and South poles. Sarmat is a formidable missile and, owing to its characteristics, is untroubled by even the most advanced missile defense systems.”