Russia's Mig-29SMT May Soon Be Getting Some New Weapons 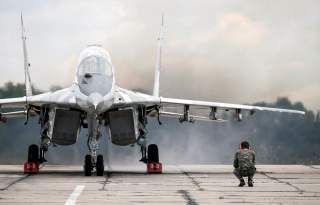 Russia expects to test new weapons onboard its upgraded Mikoyan Mig-29SMT Fulcrum aircraft in Syria. The lessons learned from operations in Syria will be used to continue development of the MiG-35 Fulcrum-F and other new MiGs.

“The program of developing MiG-29SMT planes will be continued, including for the purpose of checking effective destruction by new and promising armament systems,” Sergei Korotkov, chief designer for United Aircraft Corporation—MiG’s parent company—told the Russian TASS news agency. “The experience gained in Syria will be taken into account during the operation of these aircraft, and will also be introduced as part of the work to develop new MiG aviation platforms, including the MiG-35."

Russian MiG-29SMT fighters have been operating out of the Hmeymim air base in Syria since this past September. Thus far, the MiG-29SMTs have flown more than 140 sorties flying both by themselves and in mixed strike packages with the larger and much more capable Sukhoi Su-35S Flanker-E fighters and Su-34 Fullback bombers. The Fulcrums also escort Tupolev Tu-22M3 Backfire strategic missile bomber during their strike missions inside Syria.

Air operations over Syria has provides the Russian Air Force with a trove of data about the upgraded fighter’s reliability and the effectiveness of the MiG-29SMT’s avionics suite. "The participation of new aviation complexes in sorties makes it possible to confirm their reliability and efficiency and assess the operation of onboard radio-electronic equipment and armament," Korotkov told TASS.

Thus far, according to Korotkov, the lightweight MiG-29SMT is performing well. “The MiG-29SMT has shown mobility and simplicity in operation while demonstrating high combat efficiency,” Korotkov said. “The check of combat capabilities of the modernized MiG-29SMT frontline fighter has confirmed the workability of the regimes of using aircraft bombs, smart bombs and air-to-surface missiles with the accuracies complying with the technical specifications for the aviation complex and also surpassing them."

Russia will eventually upgrade all of its remaining Soviet-era MiG-29s to the SMT standard and will also buy a number of the advanced MiG-35 version. However, the MiG-35 project is largely an effort to keep RSK-MiG production lines going.  And, indeed, the Russian Air Force is not planning buy a MiG-35 variant with a lot of advanced features—it is instead planning to buy a rather basic version of the jet.

“The entire MiG-35 project exists only in order to maintain the production line of RSK-MiG as well as for export,” a Russian defense industry source told The National Interest earlier in the year. “Technical specifications were a secondary factor. The MoD [Ministry of Defense] wants an AESA radar, but wants it [the MiG-35] as cheaply as possible. Foreign customers, who can buy MiGs, are still buying the jet without an AESA due to cost factors.”

The MiG-35 will eventually enter Russian service, but the aircraft is primarily geared toward export customers. The Russian Air Force itself is much more interested in the Flanker series—which are much more capable and versatile aircraft.