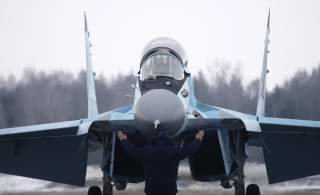 RSK-MiG will wrap up flight testing of the new Mikoyan Mig-35 Fulcrum-F fighter before the end of the year.

The company is waiting to finalize a contract with the Russian Ministry of Defense before serial production can begin. The Russian Air Force is expected to purchase an initial batch of 24 of the new MiG-29 derivative.

“Factory tests for the MiG-35 aircraft are to be completed this year,” MiG spokesperson Anastasia Kravchenko told the TASS news agency in Dubai.

“As soon as a serial contract is signed, we will start batch production at our plant in Lukhovitsy. At the moment we are waiting for a contract to be concluded with the Defense Ministry.”

Serial production in the Russian context is similar to what the Pentagon would refer to as Low Rate Initial Production. It is not the same as mass production, state testing will continue as serial production starts.

The MiG-35 will eventually enter Russian service, but the aircraft is primarily geared toward export customers. The Russian Air Force itself is much more interested in rival Sukhoi’s Flanker series—which are much more capable and versatile aircraft.

The current iteration of the Mikoyan MiG-35 is not the advanced warplane that India rejected in favor of the French Dassault Rafale in 2011. Rather, the new MiG-35 is a somewhat upgraded land-based version of the MiG-29KR carrier variant of the long-serving Fulcrum. It has no thrust vectoring controls and lacks an active electronically scanned array radar even though Russia has the technology.

“The entire MiG-35 project exists only in order to maintain the production line of RSK-MiG as well as for export,” a Russian defense industry source told The National Interest earlier in the year.

“Technical specifications were a secondary factor. The MoD [Ministry of Defense] wants an AESA radar, but wants it [the MiG-35] as cheaply as possible. Foreign customers, who can buy MiGs, are still buying the jet without an AESA due to cost factors.”

Securing foreign customers is the reason Russia is showing off the MiG-35 in Dubai. Only time will tell if the MiG-35 will be successful, but the Fulcrum-F might be the RSK-MiG’s last hope of regaining some of its lost market share on the international fighter market. Moreover, success or failure of the MiG-35 on the international market will determine if MiG remains as an independent entity within Russia’s United Aircraft Corporation holding company or if it will be subordinated to archrival Sukhoi.