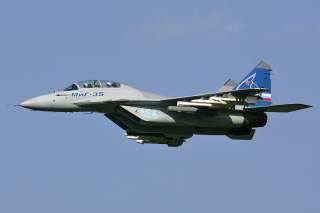 As with many Russian military project, things are not always what they seem... Such is the case with the new RSK-MiG MiG-35 Fulcrum-F.

The current iteration of the Mikoyan MiG-35 is not the advanced warplane that India rejected in favor of the French Dassault Rafale in 2011. Rather, the new MiG-35 is a somewhat upgraded land-based version of the MiG-29KR carrier variant of the long-serving Fulcrum. It has no thrust vectoring controls and lacks an active electronically scanned array radar even though Russia has the technology.

“The current plane is essentially an upgrade of the MiG-29KR,” a Russian industry source told me. “There is no thrust vectoring. And the lack of an AESA radar is of a more cost problem from a procurement standpoint rather than a technical problem.”

But why the elaborate video conference with Russian President Vladimir Putin if the new fighter is just a rewarmed version of the MiG-29KR? The answer is simple: Marketing.

Indeed, the entire MiG-35 project has one goal—keep RSK-MiG in business. In Russia, there is precedent for such a project, the Sukhoi Su-30M2 project existed solely to keep airframe manufacturer KnAAPO in business.

“The entire MiG-35 project exists only in order to maintain the production line of RSK-MiG as well as for export,” the source continued. “Technical specifications were a secondary factor. The MoD [Ministry of Defense] wants an AESA radar, but wants it [the MiG-35] as cheaply as possible. Foreign customers, who can buy MiGs, are still buying the jet without an AESA due to cost factors.”

The radar that Putin referred to is a mechanically scanned version of the Zhuk rather an AESA. “It can follow from 10 to 30 targets at once, and can operate over land or sea. This is a genuinely unique and promising aircraft, 4++, you could say, very close to being fifth generation,” Putin noted during the conversation. However, the radar is not nearly close to being comparable to an AESA.

The MiG-35 will eventually enter Russian service, but the aircraft is primarily geared toward export customers—which is why the video conference with Putin focused heavily on foreign sales. The Russian Air Force itself is much more interested in the Flanker series—which are much more capable and versatile aircraft.

“We have created a multi-spectrum system that was integrated into the armament system and additionally installed aboard the MiG-35, and along with other systems, we have developed the Generation 4++ complex,” United Aircraft Corporation general designer and vice president for innovations Sergei Korotkov told Putin. “ We hope that after the trials, the Defense Ministry will buy this machine and that foreign customers will also come to sign contracts with us.”

Indeed, Korotkov statement is more of a plea than anything else as the MiG-35 is pretty much the Mikoyan design bureau’s last hope for survival given Sukhoi’s overwhelming advantage. Only time will tell if the MiG-35 gambit will payoff for RSK-MiG, but the deck is stacked against it.