Russia’s New Hind Could Be Its Best Helicopter Ever 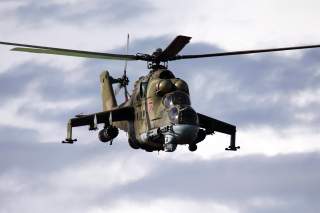 Some 50 air forces and air arms around the world operate different variants of the famous Mil Mi-24 Hind attack helicopter. Market for upgrades of this type is therefore huge – and the competition is correspondingly fierce.

The best-known upgrades for Mi-24s are offered by different Russian and Czech companies, but also by the Israeli Aircraft Industries, WZL in Poland and SAGEM in France.

However, one of the least-well-known yet biggest and most successful upgrades of Mi-24s ever was launched by the South African company called Advanced Technologies and Engineering. The Super Hind upgrade in question resulted in spectacular modifications to the original airframe.

However, for reasons related to the small size, and thus the influence, of the company in question — as well as its binding to strict confidentiality agreements with customers and fierce competition from Europe and Russia — the project nearly killed the company.

Originally, ATE was a group of small private enterprises based in Midrand, South Africa, that used to be involved in management of defense programs, with a focus on integration of avionics and weapons systems on military aircraft.

In two decades of existence, ATE became involved in development of several programs, including avionics- and weapons-integration for Spanish Mirage F.1 fighter-bombers and South African PC-7 Mk.II turboprop trainers and the development of systems for the South African Rooivalk attack helicopter.

Having successfully completed the work on the Rooivalk, the ATE first took interest in the Mi-24 in 1996. As of the time, dozens of Mi-24s had been acquired by multiple air forces in Africa, Asia and Latin America.

Unlike other companies offering similar upgrades, the ATE didn’t retain the original navigational and attack suites while loading the airframe with additional equipment. Instead, it first focused on that type’s deficiencies in regards of night-combat capabilities, fire-power, reliability and troublesome and expensive logistics.

Furthermore, during the flight testing in 1999 the South Africans found out that Mi-24 was much overweight, which in turn reduced its agility. Finally, the ATE’s engineers concluded that the further work on Super Hind would have to be cost-effective, include little or no development risks and be fast-tracked.

Their ideas attracted attention of the Algerian air force which in 1999 placed an order for the upgrade of 34 of its Mi-24 to the Super Hind Mk.II standard. This was a low-cost version retaining Soviet-built weapons system, but replacing existing aiming systems with latest South African technology.

In the course of related negotiations and further testing, the Algerians became attracted by the much more advanced Super Hind Mk.III configuration. This included a removal of most of obsolete, Soviet-made avionics — only the air data system, rate gyros and radar altimeter were retained. This resulted in weight reduction of more than 1,800 kilograms.

Finally, helping Algerians solve often problematic supply of spare parts, ATE tackled the issue of logistics and relatively complex maintenance. The company made the Super Hind Mk.III user-friendly and maintainable even under most primitive conditions and helped Algerians obtain ability to completely overhaul their Super Hinds at home.

Delighted by results, the Algerians re-negotiated their order and had all 34 Mi-24s upgraded to Mk.III standard. While some of work was undertaken in South Africa, much of it was completed in Algeria.

Super Hinds entered service in 2001. Although one helicopter was written off after an early training accident, the project proved successful beyond the imagination of most of the people involved. Several of Algerian pilots commented that they experienced no problems while re-qualifying, and pointed out the seamless integration of new components with the original helicopter as the reason for success of the project.

Furthermore, they stressed, the weight savings considerably improved the ‘hot & high’ performance of the Super Hind. Before soon, the type was blooded in combat against Islamist extremists in southern Algeria, and proved lethal beyond any doubt – especially by night.

Unsurprisingly, the Super Hind Mk.III attracted lots of public attention abroad. Emboldened, the ATE offered it to a number of East European air forces that were in the process of joining the NATO. At the same time, it intensified further research and development of more advanced variants, and began considering similar upgrades for the Mil Mi-8s and Mi-17s.

That’s when the troubles began. The Russians fell all over ATE. According to some contemporary Russian commentators, the Super Hind Mk.III was “dangerous to fly.” South African inventions would “place Algerian crews at great risk.”

Ironically, while explaining that the South African modification of the Mi-24 was “little else but taking pieces from Rooivalk and putting them into the Super Hind,” the Russians launched an effort to obtain the best available information about ATE-applied modifications.

Failure of negotiations with Bulgaria and expenses for further research and development of the Super Hind drove the ATE to the verge of bankruptcy. The company then entered cooperation with the Ukrainian AVIAKON but Ukraine placed no orders. Only Azerbaijan opted to upgrade its Mi-24s to the Super Hind Mk. III standard in Ukraine – the source for its original 10 Mi-24s.

Even then, in an effort to save money, the Azerbaijanis selected a variant deploying Ukrainian weapons, instead of south African. Orders from several other potential customers failed to materialize. A number of these – Nigeria included – opted for much more expensive, yet far less efficient orders in Europe, instead.

Eventually, ATE was acquired by Paramount. This company then entered into cooperation with Yakovlev. As could have been expected, the Russians proved not the least interested in further marketing of this project.

Algeria and Azerbaijan thus remain the only users of the Super Hind – probably the most successful, and certainly the most spectacular, upgrade of the venerable Mi-24.

This article by Tom Cooper originally appeared on War is Boring.