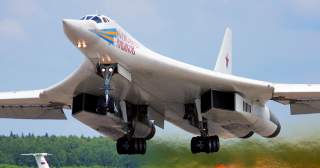 Russia appears to have made some progress in the development of the new Tupolev PAK-DA stealth bomber.

“I created multiple layouts for the PAK DA made of composite materials, as well as a full-size mock-up of made of wood,” a Russian defense industry source told the Moscow-based TASS news agency. “The layouts are of a flying wing configuration."

According to a report published by Gazeta.ru—the cockpit mockup is being used to refine ergonomics inside the cabin. The company has also built a 10:1 scale wind tunnel model, which is will presumably be tested at Russia’s Central Aerohydrodynamic Institute (TsAGI) at Zhukovsky.

Unlike previous Russian bombers, the PAK-DA will focus on stealth—substantially reducing both its radar cross-section and its infrared signature. The new bomber will be configured to carry its armament within internal weapons bays and the aircraft will feature next-generation electronic warfare (EW) systems. “The PAK DA is to be equipped with the latest radioelectronic warfare equipment of domestic manufacture, unparalleled in terms of effectiveness,” a source told TASS.

Centre for the Analysis of Strategies and Technologies researcher Mikhail Barabanov, editor of the Moscow Defense Brief, told The National Interest that the Russian Air Force would like the PAK-DA to function as a penetrating strike aircraft similar to the future Northrop Grumman B-21 Raider. “I think that the Russian Air Force wants a penetrator that will complement the Tu-160M2 which is an ALCM [air launched cruise missile] carrier,” Barabanov said.

Russian deputy minister of defense Yuri Borisov suggested that the PAK-DA would also be able to carry long-range hypersonic cruise missiles. As such, the new aircraft would be optimized to have the longest possible reach. The PAK-DA would fly “as long as possible and unobtrusively in the air, so that, without going into the affected area, so that they can launch their weapons on to their targets,” Borisov told Gazeta in December.

The PAK-DA is expected to be subsonic aircraft—as its flying wing configuration suggests. The bomber will use an improved non-augmented variant of the Tupolev Tu-160’s Kuznetsov NK-32 powerplant. According to the Gazeta report, the modernized engine will offer 10 percent additional thrust compared to the existing motor. “It will have a number of technical changes and improvements, and the engine will go to the PAK DA,” United Engine Corporation sources told the state-owned RIA Novosti in 2014. “This is a new engine based on the unified gas generator TC-32 of the second stage."

But there are those who are skeptical of the PAK-DA project. CNA Corporation research scientist Michael Kofman, who specializes in Russian military affairs, dismissed the latest developments. “It's a wooden mockup,” Kofman told The National Interest. “How's that progress?”

Barabanov, however, said that he believes that the PAK-DA project is a genuine effort by Russia to field a new next generation strategic bomber. It is simply a matter of political will for Russia to find the money to pay for such an expensive program. “It is a real project,” Barabanov said. “But it is a rather philosophical question about the level of political support for such projects.”