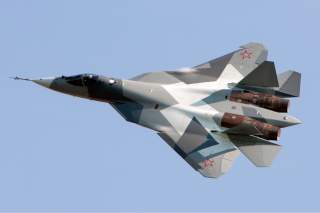 United Aircraft Corporation is gearing up to start serial production of the Sukhoi T-50 PAK-FA fifth-generation stealth fighter according to Russian media reports. The eighth prototype T-50—which is nearly compliant with Moscow’s requirements for a next-generation fighter—is set to make its first flight on June 20.

“Unlike the previous aircraft, the eighth airframe is fully equipped with the equipment and systems prescribed in the specifications to create a prospective frontline aviation system,” a defense industry source told the Russian-language daily Izvestia. “With the advent of the new fighter, it can be said that the T-50 has reached a stage where it’s combat capable and ready for mass production and for use by the Russian Aerospace Forces.”

A total of four additional T-50 aircraft are in various stages of final assembly at the Komsomolsk-on-Amur Aircraft Production Association plant in the Russian Far East. A ninth aircraft is set to joint the T-50 flight test program in September. But while flight-testing is not yet complete, UAC expects to sign a contract with the Russian Aerospace Forces to begin serial production of the T-50 in the fall of this year, according to Izvestia’s source. Deliveries of the new stealth fighter are set to begin in 2017.

The Russian Defense Ministry is expected to make an initial purchase of only a dozen operational T-50 aircraft. The Russian Aerospace Forces are expected to use those initial twelve production jets for operational testing before Moscow commits to buying more of the expensive new stealth fighters. Indeed, according to Russian sources, there is a lively debate within the Russian military as to whether or not stealth aircraft like the T-50 are worth the money. That debate—in addition to Moscow’s economic woes—is among the several reasons the Vozdushno-Kosmicheskiye Sily is taking a wait-and-see approach towards the new jet.

The other major concern for the Russian Aerospace Forces is the aircraft’s propulsion system. Initially, the T-50 will go into limited service powered by a pair of Saturn Izdeliye 117—also known as the AL-41F1—afterburning turbofans capable of producing 31,967lb (142kN) of thrust. The AL-41F1 is an extensively modernized version of the AL-31FP—found on older Su-27 and Su-30 Flanker variants—that was developed for the latest Su-35S Flanker-E.

While the AL-41F1 is a suitable motor for the new Flanker-E, it has proven to be less than satisfactory for use onboard a fifth-generation fighter. According to Russian sources, though the AL-41F1 provides enough thrust for sustained supersonic cruise capability, it does not meet the Russian Aerospace Forces requirements for thrust-to-weight ratio or fuel efficiency.

However, the Russians had only intended to use the AL-41F1 as an interim engine. Saturn is currently developing a 40,000lbs-class engine called the Izdeliye 30, which is intended to be the definitive powerplant for the new Russian fighter. However, Russia faces a challenging road ahead with developing the Izdeliye 30. Indeed, Izvestia reports that the T-50 will only receive the new engine between 2025 and 2027. Much of the problem stems from Russia’s post-Soviet malaise in the 1990s when technology development effectively ground to a halt as funding all but evaporated.

However, engine development is by far the most complex and technically challenging aspect of developing a new combat aircraft. That’s a lesson the United States learned during the development of the Grumman F-14 Tomcat and McDonnell Douglas (now Boeing) F-15 Eagle during the 1970s. To remedy the problem, the Pentagon started development work on the F119 and its General Electric YF120 competitor years before embarking on the development of the Lockheed Martin F-22 Raptor.

But as recent experience has shown, even relatively mature engine designs can encounter teething problems when being adapted for a different application. One example of that was when the Pratt & Whitney F135—which was derived from the F-22’s nearly flawless F119—encountered problems after being modified for use on the Lockheed Martin F-35 Joint Strike Fighter. The F135 had issues with afterburner screech and fan-blades rubbing against the casing—resulting in the loss of one aircraft.

Because engine development is so difficult, both the Air Force and Navy have embarked on developing advanced adaptive-cycle engine technologies well ahead of either service’s combat aircraft program had entered into even an analysis of alternatives phase. Both the U.S. Air Force and the U.S. Navy are starting preliminary work on next-generation fighters with the Penetrating Counterair program and the Next Generation Air Dominance program, respectively.

However, the Pentagon is well aware that propulsion is will be the most challenging and expensive aspect of any new aircraft program. Indeed, the Air Force might borrow from the Russian playbook and use an interim engine on its new fighter when the time comes. “The engine is a long pole if everything must be new, but we can always build something with an existing engine,” said one Air Force official familiar with the service’s next-generation combat aircraft efforts. “Mission systems and interconnectivity are the most critical aspect of building capability in the future.”