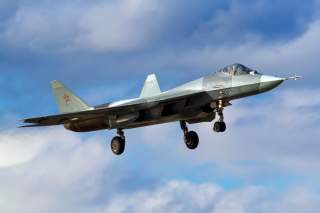 Russia has started testing its new Sukhoi Su-57 PAK-FA fifth-generation fighter with its new next-generation Saturn izdeliye 30 engines. The flight-testing with the new engines will run for several years. In the meantime, the Russians will build a dozen Su-57s equipped with interim Saturn AL-41F1 afterburning turbofans producing 32,500lbs thrust each for operational testing.

There are few details available about the Saturn izdeliye 30 engines, but the new powerplant is expected to deliver 24,054lbs dry thrust and 39,566lbs of afterburning thrust. However, they should be ready for use around 2025. The Russian air force could buy as many as 160 of the next iteration of Su-57, which will be equipped with the new engines.

Right now, Moscow will only buy 12 Su-57 aircraft, which are expected to be delivered in 2019. Overall, the Russian air force is not likely to buy more than 60 of the initial version of the Su-57 in total.

One of the reasons the Russians are less than enthused at buying the initial version of the Su-57 is because the stealth fighter is currently powered by interim Saturn AL-41F1 afterburning turbofans producing 32,500lbs thrust each. That is the same engine as the existing Su-35S Flanker-E, which uses many of the same systems that the Su-57 will.

Indeed, with exception of stealth, the new Flanker offers much of the same capabilities as the new fifth-generation fighter. Thus, the Russians are unwilling to spend money on a system that offers only a marginal increase in performance in their view. “Su-35 fighters of the 4+ generation, according to military pilots, demonstrated very good characteristics,” Russian deputy defense minister Yuri Borisov said according to the Russian media.

However, while Russia will continue to buy modern combat aircraft such as the Sukhoi Su-35S Flanker-E air superiority fighter and the Su-34 Fullback bomber, Moscow is not likely to make large purchases of the fifth-generation Su-57 PAK-FA stealth fighter until after 2027.

“The Su-57 is not expected to enter into serial production until upgraded engines are ready, which is unlikely to happen until 2027,” Center for Naval Analyses senior research scientist Dmitry Gorenburg wrote in a new PONARS Policy Memo. “Over the next eight years, Russia will continue to purchase small numbers of these planes for testing.”

However, while fighter production will continue, the Russian Air Force will likely deemphasize combat aircraft procurement to focus on other more pressing priorities.

“Overall, with many modern fighter aircraft now in place, rates of procurement will slow in order to allow for the purchase of other types of aircraft,” Gorenburg wrote.

“The same goes for military helicopters, since the Russian military has received what it needs in new helicopters during the last seven years. Development of a new high-speed helicopter will not start until after 2027.”

During the coming years, the Russian Air Force is likely to focus on addressing support aircraft such strategic airlifters and intelligence, surveillance and reconnaissance planes. Moreover, the Russians will also have to address persistent problem with their aerial refueling capabilities.