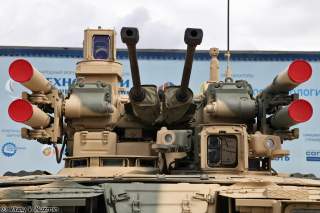 Russia is developing a third generation of its BMPT-72 Terminator combat support tank.

The vehicle, designed to support tanks and infantry, will also be able to shoot down drones, according to Russian media.

"The new vehicle will be able to operate against all types of targets: air, ground, enemy troops and material targets,"  Sergei Abramov, a director of the state-owned Rostec armament firm, told Sputnik News.

Changes could include "ground-to-air projectiles with an adjustable trajectory, which will allow the Terminator-3 to bring down unmanned aerial vehicles, as well as burst projectiles and larger-caliber main guns," another defense industry official told Sputnik News. Abramov said the vehicle's crew size could be cut from five to three through increased automation.

Though based on a T-72 tank chassis, the 44-ton BMPT-72 is technically not a main battle tank like a regular T-72 or a U.S. M-1 Abrams. Instead of a big gun, it is armed with two 30-millimeter autocannon, two automatic grenade launchers, four Ataka anti-tank missiles and a heavy machine gun. The Terminator is intended to be a combat support vehicle, a well-armored backup to regular tanks and infantry, especially those operating in urban terrain where weapons like rapid-fire cannon and grenade launchers come in handy.

The current Terminator 2 has already been deployed with Russian troops in Syria and with the Kazakhstan army, with Algeria reportedly scheduled to receive 300 this year.  "Taking into account the experience of the combat use of the Terminator, we are now working on the shape of a new modification of this machine," Abramov said. As for the designation "Terminator 3," Abramov said that was a possible name, depending on Russian military approval.

The BMPT-72 was conceived in the 1990s, based on Russian experiences in Afghanistan and Chechnya, where numerous Russian armored vehicles were destroyed by insurgents armed with antitank rockets and missiles. Equipping a heavy armored vehicle with smaller but rapid-fire weapons to engage infantry and man-portable anti-tank weapons, should leave regular tanks free to use their heavy cannon against bigger prey.

However, turning the Terminator into an anti-drone platform raises a few questions. Where will anti-drone projectiles -- it's not clear whether they will be guns or missiles -- be fitted on a chassis that's already packed with nine different weapons? Where will the vehicle mount an air defense radar? If it doesn't have radar, then will it only target small drones within its line-of-sight?

It's not that dual-purpose armored vehicles are new. The quadruple automatic cannon on the legendary Soviet ZSU-23-4 air defense vehicle proved devastating against ground targets (as did the U.S. M42 Duster in Vietnam). But arming the Terminator 3 with cannon, grenade launchers, machine guns, anti-tank missiles -- and anti-drone weapons? That's a lot to cram on a single vehicle, and a lot for the crew to handle.

As to whether the concept of a combat support tank makes sense, that remains to be seen. Russia claims the Terminator 2 has been successful in Syria, though that's a very limited demonstration. Historically, the combat support tank was used in World War II: the British armed some A15 Crusader tanks with a 3-inch howitzer, while the Americans armed M4 Shermans with 105-millimeter howitzers.

While these vehicles are well-armored and offer specialized capabilities, especially against infantry and other soft targets, they come at a cost. Tanks are heavy, complicated beasts that require intensive maintenance. A BMPT-72 will presumably be  more survivable on the battlefield than a lighter vehicle, but also require more care. Indeed, the original Terminator was based on a T-90 tank chassis, and was rejected by the Russian military in part because it was too complicated for the mission.

The U.S. Army is adopting an air defense version of the wheeled Stryker troop carrier. Consider the implications if it tried to create an air defense or anti-tank vehicle based on an M1 Abrams chassis.

Despite having a cool name like "Terminator," it remains to be seen whether the BMPT-72 will prove a good idea.