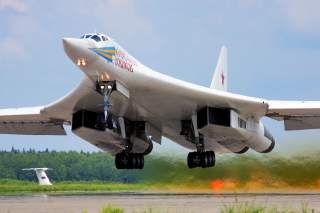 The Trump Administration lists the Tupolev PAK-DA stealth bomber as a developmental system that the United States might faceoff against in the future in its Nuclear Posture Review (NPR). However, the PAK-DA is a long-term project rather than something the United States needs to worry about today.

Russia is currently working on restarting the Tupolev Tu-160 Blackjack strategic bomber line. Eventually, in the medium term, the modernized Tu-160M2—the first prototype of which flew earlier this year—will form the backbone of the Russian bomber force once the new build Blackjacks enter service in numbers.

However, the Russians have not given up on building the Tupolev PAK-DA stealth bomber. The PAK-DA will be a long-term program to recapitalize the Russian bomber fleet once older Soviet-era designs start to age out.

“PAK-DA still exist, but it is a very long term project,” Vasily Kashin, a senior fellow at the Center for Comprehensive European and International Studies at Moscow's Higher School of Economics told The National Interest.

Like its American counterpart, the Northrop Grumman B-21 Raider, the PAK-DA will be a penetrating stealth bomber. The B-21, however, will be designed primarily to drop nuclear gravity bombs, but it will also serve as a launch platform for the Long Range Standoff (LRSO) cruise missile in cases where it might not be able to penetrate into a particular area. “The B-21 will be able to deliver both gravity bombs and the LRSO, the latter supporting the long-term effectiveness of the bomber leg,” as the NPR states.

The PAK-DA will likely have the capability to drop nuclear gravity bombs and the Russians do have a formidable arsenal of such weapons.

“They have gravity bombs and have had that for many decades,” Hans Kristensen, director of the Nuclear Information Project at the Federation of American Scientists told The National Interest. “Very little is known in public about what they look like or their capabilities, but a bomb is a bomb is a bomb. I haven’t heard they have guided nuclear bombs, however, so we’ll see if they follow the example of the B61-12.”

However the Russians tend to rely on long-range nuclear-tipped cruise missiles. Thus, the PAK-DA will likely be optimized as a “strategic missile carrier” just like the Tu-160M2, relying on weapons such as the X-102 long-range cruise missile and its successors to deliver its payloads.

At the end of the days, the PAK-DA is still very much a project of the future—entering service in the 2030s at the earliest.

“Even flight testing is expected to start at the second half of the next decade,” Kashin said. “And strategic bomber projects are always very difficult and unpredictable. I think it will be around by the time when all of the Soviet built planes must be replaced.”

The PAK-DA may eventually materialize, but it is not today’s problem.