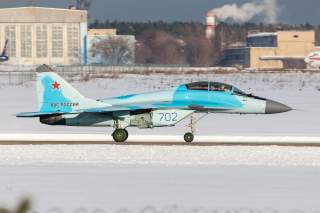 During his report to Russian President Vladimir Putin, Yury Slyusar, director of the United Aircraft Corporation—parent of RSK-MiG—told the Kremlin that the new fighter could eventually be armed with laser weapons.

“We have increased from six to eight the number of suspension points, which will make it possible to use current and future airborne weapons systems, including laser weapons,” Slyusar told Putin.

Even though state-run media channel enthusiastically broadcast the statement, the announcement was immediately met with derision amongst professional defense analyst community—both in Russia and in the United States.

“The presenter clearly misspoke, intending to say laser-guided weapons, but it resulted in an instant joke among Russia defense watchers,” research scientist Michael Kofman—an expert on Russian military affairs—at the CNA Corporation told me. Sources in Russia concurred with Kofman’s assessment—Slyusar was not likely intentionally trying to be misleading—rather, it was most likely an error.

While the original MiG-35 prototype was equipped with a Zhuk-MA active electronically scanned array radar and thrust-vectoring controls. However, the new simplified MiG-35 is a simply a slightly upgraded land-based version of the naval MiG-29KR. As such, while the new MiG-35 will be considerably more capable than the original MiG-29, the new jet is a far cry from the advanced derivative that was proposed for export to India in 2011. Indeed, the current jet does not even have a phased-array radar, relying instead on the Zhuk-M mechanically scanned set.

Thus, while in this case this was not a deliberate piece of fiction promoted by the Kremlin, laser weapons mounted on the MiG-35 will remain in the realm of fantasy for the foreseeable future.