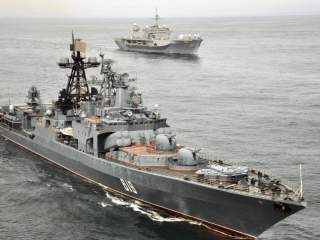 Squeezed in Europe by U.S-led sanctions and robust NATO reactions in the aftermath of the annexation of Crimea, Russia is now finding itself in a prime position to exploit the unfolding geopolitical dramas stirred up by China in East and Southeast Asia. Moscow has proactively demonstrated its determination to play a leading role in shaping the outcome of the highly explosive regional conflicts, at the expense of Beijing and potentially Washington as well.

Until recently, President Vladimir Putin’s strategic priorities had heavily favored Europe and the Middle East, culminating in his reckless actions in destabilizing Ukraine, and his wholesale political, diplomatic, and military backing of Syria’s Assad regime. Asia Pacific has always been an important component of the Kremlin’s geopolitical calculation, but due to Russia’s multi-layered economic and strategic interests with regional states at rivalry with each other, it had been relatively content to adopt a balanced approach to various hot-button issues. Russia’s general tendency has been not to articulate positions on territorial disputes and to refrain from active association with one side or the other, thus leaving China and the U.S. to play the dominant roles in deciding the outcome of the region’s many conflicts.

But Beijing’s giddiness over this new Russian partnership in its crusade against U.S. involvement in the South China Sea disputes, and the dismay felt by some of China’s old foes and Russia’s traditional friends in the Asia Pacific region, such as Vietnam, proved short-lived. Between May 19 and May 20, Mr. Putin held a party for the leaders of the ASEAN member states at his favorite resort in Sochi, Russia. Hailed by TASS as “the biggest international event in Russia in 2016,” the Russia-ASEAN summit was aimed directly at China’s increasing economic and strategic dominance in Southeast Asia, and most astonishingly, siding unequivocally with the ASEAN nations against China’s position in the heated South China Sea disputes.

The Sochi Declaration is decidedly anti-China in its wording, containing almost identical positions to those steadfastly held by ASEAN nations and the United States, such as that they (i.e., Russia and ASEAN nations) resolve to “ensure maritime security and safety, freedom of navigation and overflight and unimpeded commerce; promote self-restraint, non-use of force or the threat to use force and the resolution of dispute through peaceful means in accordance with universally recognized principles of international law.”

After delivering such a broadside against China on the South China Sea dispute, Mr. Putin also spoke triumphantly of Russia’s agreements with ASEAN nations to import Russian energy resources, let Russia build nuclear power plants, construct railroads, and operate the GLONASS satellite positioning system in the ASEAN region, all of which have been China’s economic and technological priorities. Mr. Putin then ebulliently told reporters that “there has not been a single disagreement (among the participants of the Russia-ASEAN Summit).”

China should also be further agonized by the seemingly inevitable rapprochement between Moscow and Tokyo, as both Mr. Putin and Prime Minister Shinzo Abe are getting closer than at any time since the end of World War II to reaching an official agreement on the Northern Territories dispute.

On the Korean Peninsula, the Kremlin seems determined to use all of its diplomatic muscle and political capital on both Pyongyang and Seoul to exert more and more influence, especially to extend the Trans-Siberian Railway, which has already reached inside North Korea, all the way to South Korea, thus connecting Western Europe to the far corner of East Asia.

Some nations caught in the midst of the China-U.S. crossfire are also relieved to find an active Russia as a new go-to safe place in Asia Pacific. Prime Minister Hun Sen of Cambodia, long agonized by acting as a scorned Beijing puppet within the brotherly ASEAN community, eagerly asked Mr. Putin while in Sochi to renew Moscow’s erstwhile strategic interest and heavy investment in his country’s reconstruction begun in the 1980s in the immediate aftermath of the overthrow of the murderous Khmer Rouge regime of Pol Pot.

All in all, Russia’s gain in Asia Pacific is China’s loss. The decades-old Moscow-Beijing shadow boxing continues.

This story originally appeared in on the Hoover Institution’s Military History in the News Channel.