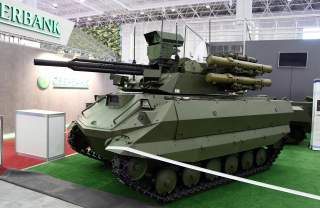 This year's Army-2017 military expo in Russia has featured a myriad of systems designed to showcase current Russian achievements fielded by the country's forces, as well as to show prospective new technologies. Unmanned military systems—or military robotic complexes, as Russia calls them—receive a lot of attention. Large and mid-sized unmanned combat vehicles as well as as airborne unmanned technologies were shown in the first half of the expo—Russian designers and manufacturers exhibited other new models towards the second half of the exhibition.

Representatives of the Volga State Technological Institute showcased a robotic snowmobile built for the Russian Far North and the Arctic. According to project developers, the unmanned vehicle overcomes obstacles through a platform that simulates a change in the center of gravity, similar to the movements of a person on a snowmobile. They added that such a system can be installed on any snowmobile, turning them into unmanned versions. In the near future, designers plan to work out the interaction between these snowmobile "drones" so that they are able to signal each other about possible obstacles such as snowstorms, landslides and ravines. Given the emphasis that Russian Ministry of Defense is placing on securing Russia's role in the Arctic regions, it is likely that such unmanned ground vehicle may be utilized soon.

The MRP-500 all-terrain robotic chassis was another item of interest. This platform is equipped with wheels that can operate individually, giving the vehicle an upgraded ability to overcome numerous obstacles. MRP-500 is designed to study how UGVs can traverse hard-to-reach areas, as well as be part of various modifications resulting in multiple UGV mission assignments. This platform can carry 500 kilos of cargo, and is capable of mounting stairs, as well as trenches and obstacles up to 1 meter (3.3 feet) high. This unmanned vehicle is similar to the MUTT UGV deployed by the US military, and its smaller MRP-100 counterpart augments large "Vihr" unnamed combat vehicle unveiled at the expo several days ago.

Another UGV presented was a small tracked "Captain"(Kapitan) platform, designed visual exploration of the terrain, inspection of explosive objects and remote patrolling. This system is currently undergoing factory tests, which will be followed by state trails. Its batteries allow for a 3 hour operation at a distance of up to 1500 feet from the operator. Unmanned and remote-controlled devices of this kind are ubiquitous in other militaries, especially US forces that have used them extensively in recent conflicts. Such small, simple devices are great force multipliers, and US military has many vehicles at its disposal.

While many systems Russia showcased at this expo are just prototypes, given the increasing attention that Russian Ministry of Defense is giving to militarized robotics, it is likely that the government will seek to fast-track some of these developments into its forces.