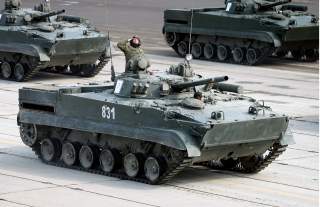 Since the 1970s, the Russian military has possessed a diverse fleet of armored vehicles it can drop out of airplanes … with parachutes, of course.

The BMD family of infantry fighting vehicles is armed to the teeth with autocannons, machine guns and anti-tank missiles. And despite being very much a product of the Cold War, the little fighting vehicles have continued to see combat — and the new BMD-4 variant is even packing a 100-millimeter gun.

How did an airborne assault tank even come about?

Following World War II, the Soviet Union expanded its elite air landing forces — a separate branch of the military known as the VDV, which at its peak consisted of 15 Guards Airborne divisions and 13 independent brigades. Soviet strategists foresaw deploying the VDV far inside enemy territory as part of their “deep battle” doctrine, with different airborne units dedicated to strategic, operational and tactical missions.

However, Soviet military theorists were aware of the problems airborne infantry had faced during World War II, particularly in massive air-landing operations such as Operation Overlord and Market Garden — the latter which resulted in the virtual destruction of the British 1st Airborne Division.

Upon hitting the ground, scattered and disorganized paratroopers lacking mobile anti-tank weapons were likely to be slammed by counter-attacking enemy tanks. Furthermore, once landed, airborne infantry were slow to advance on objectives because they lacked their own motor vehicles.

The Soviet solution, of course, involved giving the airborne troopers their own armored vehicles — ones that can either be air dropped, lifted by helicopter, or rolled readily from a transport plane at a rough satellite airfield recently captured from the enemy.

In 1966, the Soviet Union introduced the BMP-1 infantry fighting vehicle, a new type of armored personnel carrier which gave mechanized infantry squads the firepower to take on tanks and entrenched ground troops. The 14.6-ton BMP-1 packs a machine gun, an anti-tank missile launcher for sniping tanks at long range, and a 73-millimeter low-pressure cannon.

Soviet designers crammed the same formidable armament package onto the much smaller and lighter aluminum-hulled BMD-1, or Boyevaya Machine Desanta, meaning “Airborne Combat Vehicle.” The vehicle even boasts two additional machine guns on the corners of the front hull.

The smaller, eight-ton BMD-1 is most easily visually distinguished by its shorter front hull compared to the BMP-1.

The speedy, tracked vehicles can attain roads speeds of 50 miles per hour, 25 percent faster than the BMP-1. By 1982, each 6,500-man Soviet airborne division had 330 BMD-1s on its organizational chart, effectively making them into light mechanized units.

BMDs are compact enough that Mi-6 and Mi-26 transport helicopters can carry them, and up to three can fit inside larger Il-76 transport jets, or two within an An-12 medium transport. Heavy-duty hydraulic suspension helps the BMD cope with the impact of an air drop, and also allows for adjustable ground clearance ranging between 10 and 45 centimeters.

Originally, the Soviets’ plan was to drop the vehicles in cargo palettes separately from their crew of four, but the operators often landed far away from their tanks and had trouble finding them. The solution — simple enough — was for the driver and commander to hit the ground with a jeep and drive to their BMD.

The armored vehicles still experienced rough landings while floating down to the earth at 15 to 20 meters per second, so the Soviet Union developed a rocket parachute. Touch-sensitive rods dangling below the BMD pallet activates a retro rocket upon hitting the ground, helping slow terminal landing velocity to a safer six meters per second.

The BMDs can float in more ways than one.

The light vehicles are fully amphibious, propelled through water at speeds of up to six miles per hour by two water jets similar to those on the PT-76 light tank. Transitioning the vehicle for water operations merely involves lowering a trim vane, raising a driver’s periscope and activating a bilge pump.

BMDs brought paratroopers one more key advantage — the vehicles are protected from many of the effects of nuclear, chemical and biological weapons, giving the crews a chance to survive on a contaminated battlefield.

However, the BMD-1 arrived with several major downsides. Its smaller, cramped passenger compartments have a lower passenger capacity of just three or four paratroopers, who must exit out a top hatch, a far more vulnerable disembarkation method than via the rear ramp on a BMP. In recent fighting in Ukraine, infantry have often elected to ride on top of their BMDs, rendering somewhat absurd the entire premise of an armored transport.

For this reason, some observers consider the BMD to be more of a light tank than a true infantry fighting vehicle.

Furthermore, the BMD has lightweight aluminum armor — not steel — which is prone to catching fire and melting, resulting in many battle-damaged BMDs being reduced to charred skeletons after the fuel ignited in combat.

The BMD-1 shares some problems in common with the BMP-1. The BMD’s armor is roughly just as thin, with a maximum of 33 millimeters on the front for protection from 12.7-millimeter machine guns, and as little as 13 millimeters along the vehicles side. That’s just enough to protect those inside from rifle bullets but little else.

The 73-millimeter “Grom” gun has also performed poorly in combat due to limited range and accuracy beyond 500 meters, and insufficient vertical traverse to hit targets on steep hills or at the bottom of deep valleys. The early Malyutka anti-tank missiles carried on top proved difficult to fire, guide and reload.

Neither weapon can be fired accurately while moving.

Airborne armor in Ethiopia and Afghanistan

The Soviet Union exported BMDs not only within the Warsaw Pact, but to Cuba, Iran, Iraq and Angola. Cuban troops were possibly the first to test the Soviet mechanized airborne doctrine in combat during the Ogaden War.

In July 1977, a Somali army of 70,000 troops and 600 armored vehicles invaded Ethiopia in an attempt to capture the Ogaden region in Ethiopia, which was majority Somali in population. The Soviet Union was then allied with both Somalia and Ethiopia.

The Kremlin first attempted to mediate the conflict, and then decided to throw all its support behind the Ethiopians, sending 300 Soviet advisers who joined 15,000 Cuban expeditionary troops.

By September, Somali forces had overrun the 25,000 troops defending the town of Jijiga near the strategic Kara Marda Pass, and in November laid siege to the walled city of Harar, the regional capital. There, an army of 40,000 Ethiopian troops bolstered by Cuban soldiers and Soviet advisers brought the Somali advance to halt.

While the Ethiopians built up their strength during the rainy season, Soviet Gen. Vasiliy Petrov planned a pincer counterattack. As Cuban tanks tackled the Somalis head on in February 1978, Mi-6 transport helicopters landed 70 BMD-1 fighting vehicles and ASU-57 assault guns at Kara Marda, dozens of miles behind the Somali defenses.

Striking in unison with a frontal attack up the pass, the airborne armored offensive swiftly recaptured the pass and Jijiga soon afterward, inflicting 3,000 casualties and spreading panic throughout the Somali army, hastening its total rout from Ethiopian territory.

Two years later, BMD-1s rolled out of the cargo bays of Soviet transport planes in Kabul, Afghanistan, enabling the airborne troops to rapidly seize major Afghan cities. Of course, just as the U.S. military learned, Afghanistan may be easy to invade but it’s difficult to leave, and the Soviet 40th Army remained committed to counter-insurgency operations against the mujahideen for the following decade.

Of the four to six divisions in the 40th Army, the 103rd Guards Airborne Division performed the majority of offensive operations. Although the desantniki, or airborne troopers, are best remembered for their use of air-mobile tactics combined with Hind helicopter gunships, the paratroopers frequently relied on their BMDs to deploy quickly into combat.

In 1985, Soviet troops in Afghanistan began receiving the BMD-2, a stop-gap model which swapped the low-pressure gun for a 2A42 30-millimeter autocannon that is more effective against infantry and light vehicles and can be fired on the move. The missile launcher was upgraded to fire newer AT-4 and AT-5 Konkurs anti-tank missiles. New steel rollers improved the vehicle’s durability on rough terrain, though the vehicle was now 50 percent heavier, at 11.5 tons.

A decade earlier, the Soviet Union had introduced the slightly lengthened BTR-D, a troop carrier variant of the BMD that replaced the turret and its armament for the capacity to carry a squad of nine paratroopers. Many BTR-D variants were produced including Rheostat artillery observation vehicles, anti-tank missile and drone carriers, and armored engineering and anti-aircraft vehicles.