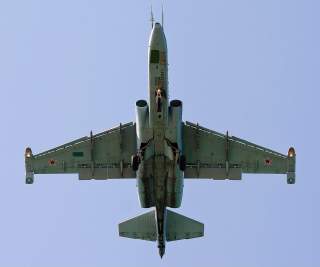 Around the same time the U.S. Air Force was looking for a dedicated close air-support aircraft, a requirement that eventually fielded the A-10 Warthog, the Soviet Union was also embarking on a search for a fixed-wing tank killer. The result was the Sukhoi Su-25, known as “Frogfoot” in the West, a plane that flies for Russia and other ex-Soviet states to this day.

In the late 1960s both the U.S. Air Force and Soviet military realized that the pursuit of fast fighter jets was leaving a gap in fixed-wing close air support (CAS) for friendly forces. The Soviet Union had fielded the Ilyushin Il-2 “Sturmovik” fighter with great success over the eastern front in World War II, and a modern day replacement was desired. The USSR’s effort to build a CAS plane began in 1968, a year after the USAF began its own search.

The Su-25, whether by accident or design, bears a striking resemblance to the YA-9, Northrop’s contender for the A-X program. A high, broad-winged aircraft with twin conventionally placed engines, the Su-25 was like the A-10 in valuing protection and lethality over all other considerations. Maximum combat speed with one thousand pounds of bombs and a pair of air-to-air missiles was just 590 miles an hour. Similarly to the A-10, the Su-25 could take off and land from unimproved airfields, and included a parachute braking system to shorten the required landing strip length.

The Su-25, like its American cousin, was designed to survive enemy air-defense fire. The hot engine exhaust is mixed with cool air to reduce its infrared signature, and some of the control systems are duplicated to resist battle damage. Elsewhere on the plane the fuel tanks were lined with polyurethane foam to prevent explosions. The aircraft could carry up to 256 flares or chaff packs to lure away infrared or radar-guided missiles, which experience in Afghanistan led the Soviets to calculate was enough to ward off eight separate surface-to-air missile attacks.

The aircraft also depends on armor plating to protect vital spaces. The cockpit is protected by a shell of titanium twenty-four millimeters thick, which the Soviets calculated could withstand up to thirty-millimeter ground fire. Stainless steel plates were added to protect the pilot’s head, and other essential pieces of equipment are further armored with stainless steel plating.

The new Soviet CAS plane was armed to the teeth. The aircraft was designed with ten hardpoints for carrying fuel tanks, missiles, rockets and bombs. Eight of the pylons were each rated for 1,021 pounds, or five hundred kilograms, while two were for carrying R-60 short-range infrared-guided missiles, the Soviet equivalent of the Western AIM-9 Sidewinder. (The Su-25 was wholly unsuited as a fighter, and the missiles were for self-defense or against slow flying helicopters only.) The Su-25 could carry both laser-guided missiles and conventional ordnance, including unguided bombs and fifty-seven-millimeter and 370-millimeter free-flight rockets.

The new jet was fitted with two nose-mounted GSh-2-30 thirty-millimeter guns on the port side, each armed with 250 rounds of ammunition. While the GSh-2-30 would likely have been effective against lighter armored vehicles like the M-2 Bradley and West German Marder Infantry Fighting Vehicle, the lack of a depleted-uranium round meant it would have done considerably less damage against NATO main battle tanks such as the Leopard II or British Challenger.

NATO first got wind of the new CAS jet in 1977, when it was given the provisional designation “Ram-J,” then “Frogfoot.” Two test aircraft were sent to occupied Afghanistan in 1980, to support Soviet ground forces in their war against the guerilla mujahideen. Frogfoots provided close air support to Soviet and Afghan government forces for nine years, during which twenty-three Frogfoots were lost to enemy fire. Many were lost after ground fire ignited one of the engines, causing the second to catch fire. As a response, Russian designers later incorporated a firefighting system could inject freon gas into either of the two engine compartments.

Su-25s stood ready to support the Red Army’s invasion of Western Europe. Unlike U.S. Air Force A-10s, which would have often been guided to targets in real time by tactical air controllers fighting alongside ground forces, Frogfoots would more often have executed preplanned strikes against likely enemy positions. NATO forces, primarily operating on the defensive, would rarely be out in the open like Soviet forces advancing west. As a result, Su-25s were more likely to carry area effect weapons such as free-fall bombs, cluster munitions and rocket pods.

Su-25s will likely serve Russian forces for the foreseeable future, as there is no money to design and field a replacement for them. In February 2018 a Frogfoot was shot down over Syria while conducting rocket strikes against ground targets, a victim of man-portable surface-to-air missiles smuggled to fighters by sympathetic backers in the Syrian Civil War. Like the A-10, if the Frogfoot is to survive over the modern battlefield it must adapt—or make room for a more survivable, lethal close-air-support platform to replace it.