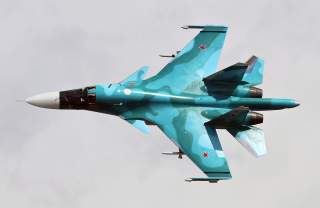 Just when it seemed that Zapad-2017 was finally moving into the rear-view mirror, it came back to life. Unlike in September 2017, when the whole world was watching (and counter-exercising), this time it passed by virtually unnoticed. Russia has a long history of breaking up its strategic-operational exercises to give its commanders the opportunity to practice General Staff plans in real time and so it is no surprise that more Zapad activities were added later; however, controlling the amount of interest in the West has been much easier this time around.

From March 26 to 29, Russia held the exercise Ladoga-2018. Officially, this was a relatively small affair by Russian military exercise standards: a little more than fifty pilots practiced detecting a conventional enemy and launching a variety of missiles in the northwest of Russia (Ladoga is the largest lake in Europe, northeast of St. Petersburg and famous for being crossed while frozen to relieve Leningrad during World War II).

However, those fifty pilots were paired with anything up to one hundred aircraft, including the 4++-generation Su-35 interceptor and the new nuclear-capable Su-34 bomber. This makes Ladoga easily the largest air exercise in Russia since Zapad-2017, indeed larger as Zapad claimed only seventy aircraft officially. In 2009, Ladoga was part of the Zapad-2009 narrative, deploying units from all services as it was the strategic-operational capstone exercise of the now-merged Northwest Military District. Since then, Ladoga has been an annual Russian Air Force event for fifty-odd pilots, though it again added substantial ground elements in 2013 as Zapad-2013 approached. However, Ladoga-2017 never happened and so my interest rose as the exercise returned in 2018.

Ladoga-2018 did feature substantial deployments of aircraft from across the Western Military District to the Besovets Air Base near the Finnish border. It seems to have simulated the mammoth air operation that the Soviet Air Force trained to conduct at the start of a major war with NATO during the Cold War, firing expensive guided rockets Russia rarely uses during ordinary training. However, there was no ground component as there was in the Ladoga exercises leading up to Zapad-2009 and 2013.

On March 12, a group of Belarusian Special Forces from Brest (on the Polish border) arrived in Ulyanovsk, Russia on the Volga River. After a week’s training, these Belarusians joined Russia’s elite 31st Air Assault Brigade (one of the first formations deployed to Crimea in 2014) on a joint peacekeeping operation. This exercise lasted March 19–22. Like most high-profile Russian exercises, it featured a colorful storyboard of events for its six hundred participants to enact.

The exercise began with a rapid insertion into the zone of conflict. By day two, the Russians and Belarusians had taken control of the region and switched priorities to establishing areas of responsibility for occupation, setting up checkpoints to defuse the crisis in which they were peacekeeping. However, on the last two days of the exercise, a group of “terrorists” attacked these checkpoints separating the conflicting parties, requiring an anti-terrorist operation to restore order. These terrorists were attacking humanitarian convoys set up by the Russian branch of the Red Cross, which has famously delivered dubious convoys into eastern Ukraine since the outbreak of the war there in 2014.

However, rather than ending happily as most of these set-piece exercises do, this one ended with a transition of duties toward defending refugees and internally-displaced persons. Furthermore, despite the exercise officially ending on March 22, further action was taken on March 23 as “terrorist” groups attempted to penetrate Russian and Belarusian military positions. Also on March 23, a Russian Airborne Command delegation arrived in Belarus for three-day organizational session with Belarus’ other Special Forces brigade. These two brigades represent the best servicemen and formations of Belarus today.

As these events were played out on the Volga, the Baltic Fleet simultaneously came to life as it has not since Zapad-2017 with a missile defense exercise on March 20 and a one-thousand-man, ten-ship command-staff exercise starting on the March 22—complete even with missile firing tests both at sea and in the air. Action was simultaneously taken to raise the readiness of all three Ground Forces armies of Russia’s Western Military District: near St. Petersburg, Moscow, and the Ukrainian border. Meanwhile, Belarus undertook a large-scale (two-thousand-man) reservist training exercise. As these forces raised their combat readiness, Ladoga-2018 arrived, delivering a notional major air operation, coupled with a simultaneous massive command-staff exercise of the 106th Guards Airborne Division just south of Moscow.

These were only the tip of the iceberg of the total amount of tactical exercises underway across Russia in March. Much of these upswing in activity can be attributed to two factors:

- Winter is coming to an end, easing the conduct of such exercises.

- Russian conscripts have now been in training for four months, giving plenty of time for them to learn their basic tasks and allow their units to begin conducting more complicated tactical exercises again.

Nevertheless, the sudden synchronization of all these exercises in a manner reminiscent of classical Russian operational planning indicates that this was a rehearsal of the unplayed first phase of the Zapad operation. In addition to the missile defense exercise in the Baltic, similar exercises were held near Moscow and the Black Sea, all within the space of four days (and directly before Ladoga). Combined with the September rehearsal of similar tactics over the Arctic, there finally seems some explanation of Russian use of its Air Force from day one of a massive Zapad operation despite Russian expectations of NATO degradation of Russian airfields by systematic cruise missile strikes.

Other naysayers might contend that only some of these exercises took place near the site of even the Zapad exercise, let alone where a Zapad operation might take place. However, Russia frequently holds rehearsals of operations away from their probable operation sites to train commanders and soldiers how to operate in “unfamiliar terrain” after learning elementary tactics on well-worn training ranges. This might shed some additional light on the (presumably) very long-range ASW exercise held on March 29 of a Tu-142 flying to the southeast Mediterranean Sea from an airfield in Russia.

Finally, others might question why reopen Zapad now after it caused so much public relations grief for Russia last year. For one thing, no one has raised much fuss this month. For another, the Russian General Staff frequently breaks up its strategic-operational exercises to practice many different aspects of a large-scale plan without causing undue strain upon Russian diplomacy, its officers and enlisted men and women, and its budget. In 2017, official Zapad preparation exercises began in Belarus as early as March and some debatably earlier. Even now, the first preparatory exercises for Vostok-2018 (in the Far East) appear to be underway near Lake Baikal. So why not keep the calendar open afterward?

The author would also like to state that this was not a rehearsal for an attack on the West in the Spring. Not only is the Spring the most disadvantageous time of year to begin a war in Central or Eastern Europe (witness the two World Wars), but most Russian engineer forces are currently actively engaged in conducting flood mitigation exercises as the Siberian rivers unfreeze and threaten a number of communities in the middle of Russia.

Overtly, Ladoga-2018 was a relatively minor exercise that almost no one took note of this week. However, it appears to be a critical piece of the grander Zapad operational picture.