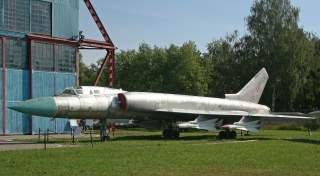 The Soviet Union had extraordinarily lengthy borders that were difficult to patrol against American nuclear bombers and spy planes. New ground-based surface-to-air missiles simply could not cover such a vast area. Confronted with a sizeable problem, the Soviets in typical fashion produced a gargantuan solution: the Tupolev Tu-128 jet fighter, which measured thirty meters long and grossed forty-three tons fully loaded—roughly half over the weight and size of the famously large F-4 Phantom. Codenamed “Fiddler” by NATO, the Tu-128 was the largest and heaviest fighter plane ever to enter operational service.

More specifically, the Tu-128 was an interceptor designed to dispatch lumbering incoming B-52 bombers as swiftly as possible. In the early decades of the Cold War, both the United States and the Soviet Union developed specialized interceptors, which they hoped could fend off potential nuclear air attacks. Interceptors needed high speed and long range to close with enemy bombers before they could deliver their devastating payloads. Effective radar and long-range missiles to attack them from far away were also vital. On the other hand, an interceptor didn’t require the maneuverability to tangle with agile enemy fighters.

The Soviets developed several generations of speedy Sukhoi interceptors during the 1950s and ’60s, but these could only fly up to around four hundred to five hundred miles, and were lacking in terms of radar. Moscow sketched out a requirement in 1955 for a plane that could carry tons of fuel, a powerful radar and heavy air-to-air missiles. Three years later, the Tupolev bureau submitted a Tu-28 interceptor that used as its basis the unsuccessful Tu-98 supersonic bomber prototype. The Tu-28 first flew in 1961 and soon proved successful in tracking and shooting down target drones, leading to orders for a production model designated the Tu-128.

Powered by two AL-7F turbojets, the seven-meter-tall swept-wing interceptor carried up to fifteen tons of fuel, allowing it to operate to a range of 1,600 miles and stay airborne for more than two and a half hours. The navigator operated an RP-S Smerch radar with a range of thirty-one miles, which was not bad for the era. While most Soviet fighters were highly dependent on direction from ground-based radar centers to intercept enemy aircraft, the Fiddler’s powerful radar allowed it close in for the kill using its own tracking data.

Once locked on an enemy, the Fiddler could engage with its four huge R-4 missiles (NATO codename: AA-5 Ash) carried underwing. Five meters long and weighing over a thousand pounds, the R-4 came in both infrared and radar-guided variants, with ranges of nine and fifteen miles respectively, and remained effective even against targets at significantly higher altitude. Soviet doctrine was to fire one of each type against the same target to improve chances of a kill.

However, the Tu-128 definitely didn’t want to get too close to an adversary: the R-4 had a minimum range of one mile, and the sluggish Fiddler, suffering from a high wing loading, could only tolerate a maximum g-load of 2.5g when making turns. (4g is typical in maneuverable contemporary fighters.) Because it was not intended to clash with enemy fighters, the Fiddler also lacked electronic countermeasures and a radar warning receiver.

Another serious problem was that the Fiddler’s radar and missiles simply wouldn’t work on low-flying aircraft—and U.S. Air Force doctrine shifted in favor of high-speed, low-altitude attacks by the 1970s. Eventually, the Soviet Union upgraded all of the interceptors to the new Tu-198M standard, which had improved radars and R4M missiles that could hit targets as low as a half mile above the ground. Later in their service life, the Fiddlers were also paired with Tu-126 AWACS planes to improve their chances of detecting intruders.

A total of 198 Tu-128s were produced, equipping six air defense regiments. This total includes fourteen Tu-128UT trainer variants, which had a third cockpit grotesquely situated in a beaky nose, leading to their being nicknamed “Pelicans.” Only veteran pilots were assigned to Fiddler units, and they received the highest salary possible for Soviet pilots. Fiddler crews had to put up with assignment to remote forward air bases, and routinely had to shadow SR-71 Blackbird reconnaissance flights, which were too fast for the Fiddler to intercept or hit.

However, the Blackbirds stayed over international airspace, unlike their slower predecessors, and the Fiddler does not appear to have fired in anger against manned aircraft—instead, its crews contented themselves with attacking U.S. reconnaissance balloons. The small spherical objects were tricky to lock onto, one Tu-128 expending all four of its missile in order to gain a single hit.

The Fiddler appears to have been well liked by its pilots for its reliability, fast climb rate and speedy high-altitude performance. The Tu-128 could even supercruise, which is to sustain supersonic flight without dumping fuel into the afterburners, a highly prized trait in fighter design today. On the downside, the Fiddler was difficult to land—the pilot had to begin lining up the runway from twelve miles away. Uneven fuel consumption across its enormous fuel tanks could also unbalance the aircraft. On the other hand, the Soviet interceptor appears to have been sturdy; when two Tu-128s collided in 1978, one of the aircraft managed to land back at base with one functional engine and a crumpled wing.

The Tu-128 remained in service until 1990, when it was finally fully retired in favor of the MiG-31 Foxhound interceptor, which could attain Mach 3 and boasted far more modern radar and missiles. By then, fighter design had shifted strongly a in favor of versatile multirole fighters such as the F-15 and Su-27. Nonetheless, there’s a certain admirable clarity of purpose behind the Tu-128: its ungainliness was not an impediment to its mission, while it fuel tanks gave it the long reach it needed to keep a vigilant eye on the airspace above the frozen far reaches of the Soviet Union.