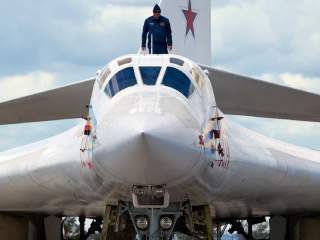 The existing Tu-160 aircraft have performed well during Russia’s Syria campaign acting as launch platforms for the stealthy MKB Raduga H-101 cruise missile, which is thought to have a range between 4,500Km and 5,500Km.

Developed during the closing stages of the Cold War, the Mach 2.05 capable Tupolev Tu-160 Blackjack was the Soviet Union’s ultimate strategic bomber.

The requirement for the Tu-160 emerged from a 1972 Soviet competition to develop a Mach 2.3 capable strategic bomber that would be Moscow’s response to the Rockwell International B-1A Lancer. While President Jimmy Carter would eventually cancel the high speed, high altitude B-1A (though President Ronald Reagan resurrected the low altitude—but much slower Mach 1.25 capable—B-1B during the 1980s) in favor of the Northrop Grumman B-2 Spirit stealth bomber, the Soviet Union would continue to develop the Tu-160.

The Tu-160 made its first flight on December 18, 1981, with production starting in 1984 at the Kazan Aircraft Production Association in central Russia. The jet entered service in April 1987 with the 184th Guards Heavy Bomber Regiment at Pryluky in what was then the Ukrainian Soviet Social Republic just as Reagan and Soviet leader Mikhail Gorbachev were negotiating the end of the Cold War. In the end, 36 Tu-160 bombers were produced (including nine test aircraft) before the December 26, 1991, collapse of the Soviet Union.

The majority—19 aircraft—of the operational Tu-160s were stationed in Ukraine when the Soviet Union collapsed while the remainder were in Russia. The Ukrainian aircraft were quickly grounded due to a lack of spare parts and the majority of the bombers were later destroyed under the Nunn–Lugar Cooperative Threat Reduction Agreement starting in 1998. However, Moscow and Kiev eventually reached a deal to transfer the eight surviving Tu-160s to Russia, bringing the total in Russian service to 15 jets. However, one of the jets crashed on September 18, 2003, temporarily reducing the fleet to 14 until the Kazan plant completed two additional airframes that had been in the factory since before the Soviet collapse.

Russia is modernizing its 16 existing Tu-160s up to the M standard, however, to sustain the fleet Moscow needs more jets. As such, Russia has embarked upon a plan to restart production of a new and extensively modernized version of the Tu-160. Moscow hopes to build at least 50 of the new Tu-160M2 bombers, which share little with their Soviet forbearer except for a common airframe design. Essentially, the Tu-160M2 will have entirely new avionics and even a modernized version of the Kuznetsov NK-32 afterburning turbofan to power it.

The first prototype of the new Tu-160M2—which ironically was completed from leftover parts from the Soviet era—flew on January 25, 2018. The aircraft is currently being used for flight sciences work but will eventually be upgraded with the full Tu-160M2 avionics suite. The new jet should make its first flight configured as a full-up Tu-160M2 by the end of the year. Full rate production is expected to start in 2021.

The Russian have concluded that they do not need a new bomber design in the immediate future because Moscow does not believe in the concept of a penetrating long range strike bomber. Instead, the Russians are much more focused on using long range cruise missiles to penetrate enemy air defenses. As such, the Tu-160 and Tu-160M2 are primarily designed to be cruise missile carriers rather than bombers in the traditional sense.

Instead, the Tu-160—which is capable of speeds of over Mach 2.0—would dash into position to launch long-range standoff cruise missiles. As such, stealth is not considered to be particularly important. Indeed, one of the advantages of a highly visible strategic bomber is that it enables nuclear signaling.

The existing Tu-160 aircraft have performed well during Russia’s Syria campaign acting as launch platforms for the stealthy MKB Raduga H-101 cruise missile, which is thought to have a range between 4,500Km and 5,500Km. The jets can carry twelve H-101 conventional or twelve H-102 nuclear tipped cruise missiles for its primary mission. Against less demanding shorter range targets, the Tu-160 can also carry Raduga Kh-15 aero-ballistic missile, which have a 160-nautical mile range. However, the Tu-160 is mostly designed for long range strategic missions and as such it will almost always be armed with weapons such as the H-101/102 and its successors.