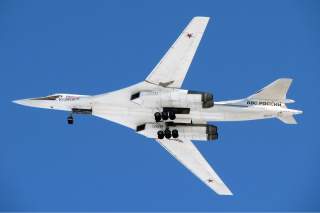 New production versions of Russia’s Tu-160M2 Blackjack supersonic strategic bomber are scheduled to enter production in 2022. The Russian Air Force is expected to order between 30 and 50 of the new version of the venerable Soviet-era cruise missile carrier. The original Tu-160 was the Soviet Union’s last strategic bomber program before its 1991 collapse.

“We are concluding R&D work in 2021 and starting from 2022 we are beginning the serial production of these machines,” United Aircraft Corporation president Yuri Slyusar said in an interview with Rossiya-24 TV Channel according to the Moscow-based TASS News Agency. “We are discussing the exact figure with the customer. I believe their number will range from 30 to 50 machines.”

The bombers will likely be built in batches of two to three per year in Kazan. Unlike many of Russia’s other high profile defense projects, the Tu-160M2 is very real and very capable. “It's a perfectly capable bomber with upgrades,” Michael Kofman, a fellow at the Woodrow Wilson International Center’s Kennan Institute—an expert on Russia’s military—told The National Interest. “It makes complete sense and indicates that the PAK-DA [stealth bomber] is a pipe dream while the real plan is Tu-160 modernization. It also shows that Russia is committed to maintaining the air leg of its nuclear triad.”

Russian sources agreed with Kofman’s assessment of the Tu-160M2 program. Vasily Kashin, a senior fellow at the Center for Comprehensive European and International Studies at Moscow’s Higher School of Economics said that work on the new Blackjacks is already underway. “This one will really be built, as I understand,” Kashin told The National Interest. “There is some actual work underway and they are going to build up to 50 of them.”

Like the original Tu-160—which is capable of speeds of greater the Mach 2.0—the new Blackjack is designed primarily as a cruise missile carrier that would launch its nuclear payload from standoff ranges. The new Blackjacks are going to be practically a new design under the hood with completely new avionics, propulsion and even airframe modifications. As such the aircraft will be given a secondary precision-guided munitions capability. “They are primarily cruise missile carriers with a secondary ability for precision bombing,” Kashin said. “They are expected to have deep upgrades, including avionics, engines and even the airframe.”

The new Tu-160M2 program will be part of Russia’s new state armament program—which emphasizes strategic systems. “The MOD [Ministry of Defense] is discussing the state armaments program and greater emphasis will be placed on funding air and space defense, strategic nuclear forces, high tech weapons and all manner of unmanned systems,” Samuel Bendett, a Russian military affairs analyst at the Center for Naval Analysis told The National Interest. “This state armaments program takes place between 2018-2025.”

The Tu-160M2 will be likely be a formidable addition to the Kremlin’s arsenal when it is built. Ultimately, in the case of the new Blackjack, it’s not a question of if it will be built, rather it’s a matter of when.