For Sale: A New Version of Russia's Deadly Su-30 Flanker 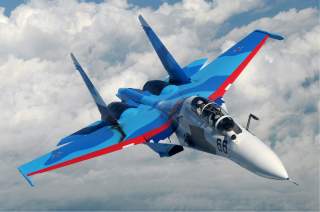 Russia is offering a new version of its potent Sukhoi Su-30 Flanker multirole fighter for export.

Called the Su-30SME, the new jet is an export version of the Su-30SM that is flown by the Russian Air Force.

Unlike the Su-30MKI—from which the Su-30SM is derived—the new SME version dispenses with Western-supplied subcomponents and is built purely with Russian hardware.

“The Su-30SME aircraft [the export version of the Su-30SM fighter jet] has been shown on the international market for the first time," a Russian defense industry source told the TASS news agency.

“Its development aims to offer foreign customers a fighter jet equipped with a Russian-made avionics suite.”

The new variant affords Russia the ability to offer the jet for sale to countries that might be interested in an aircraft with Western or Israeli sources avionics. Conversely, Moscow could also offer the jet to nations that might be under a Western arms embargo since there are no foreign sources components onboard. In any case, the Russians claim the Su-30SM and Su-30SME offer better performance than the previous export variants.

The United Air Corporation–which is the umbrella company that owns Sukhoi—says that nations in Southeast Asia, the Middle East and North Africa have shown interest in the new Flanker variant.

Versions of the Su-30 have proven to be remarkably popular on the international fighter market. It many respects, the Flanker series is Russia’s most successful post-Soviet military export.