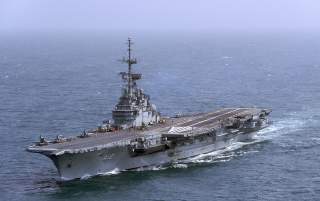 It wasn’t long ago that Brazil planned to retrofit its vintage aircraft carrier Sao Paulo to last until 2039. No longer.

Instead, Brazil will retire the 32,800-ton flattop during the next three years, according to a report in IHS Jane’s. With Argentina having given up on carriers, Brazil’s decision will leave the United States with the only operational carriers in the Western Hemisphere.

Sao Paulo was originally the Foch, a Clemenceau-class carrier which first launched in 1960. During her 40 years in service with the French navy, Foch’s air wings dodged Yemeni MiGs, intervened in the Lebanese civil war and bombed Serbia during the Kosovo conflict.

Sao Paulo does not have the distinction of being Brazil’s first carrier, however. That’s an honor belonging to the Minas Gerais, a formerly British — and later Australian — Colossus-class light carrier dating from World War II.

Minas Gerais was not a particularly capable carrier, which served the South American country from 1956 to 2001. Brazil rarely flew anything except helicopters and S-2 Tracker submarine hunter planes from the vessel.

Sao Paulo, while an aging French hand-me-down, was an upgrade compared to that. And a bargain … at least to purchase. Brazil paid France $12 million for the carrier but sunk $100 million more keeping her seaworthy.

Fires broke out aboard the vessel at least twice, once in 2004 — killing several sailors — and again 2012. The accidents forced costly repairs and kept the carrier in port for long periods of time.

That Brazil has even operated carriers, not to mention for decades, is all rather weird. In strict military terms, a Brazilian carrier makes little sense … at least right now.

But Brazil has also invested in carriers for symbolic and political reasons. Actually, those are the primary reasons.

Brazilian military officers and politicians want their country to be important — and important countries have carriers. This might seem silly, but Brazil is not alone here, and it is the same reason Russia keeps the rickety Admiral Kuznetsov around despite it being of demonstrably little value in a war.

The same could be said for the United States, which keeps an overkill number of carriers — 19 of them — including 10 enormous supercarriers even when long-range missiles and submarines threaten their continued relevance. Nations don’t always have practical reasons for why and how they build their navies.

National pride and prestige come into play as well.

“Today aircraft carriers have in many ways replaced nuclear weapons as the marker of global power, just as dreadnought battleships once were,” Taylor Marvin noted in 2013.

Were Brazil to acquire a seat on the U.N. Security Council — a position Brazil’s leaders have long coveted — a carrier would be a useful way of contributing to U.N. missions. The idea that Brazil needs a carrier for symbolic reasons was also a common argument made by Brazilian officials 17 years ago when the former Foch left for South America.

“The fact is that a country stops being ‘peripheral’ only when it is respected,” Brazilian military minister Flavio Flores da Cunha opined in 2000 in the Folha de Sao Paulo newspaper.

“And Brazil will be respected only if it has the conditions and competence necessary for making its decisions at the international level,” he added.

“Without naval aviation, there is no way to defend a fleet. Furthermore, any fleet without it is no more than a coastal navigation fleet.”

So, that desire for respect means that even without Sao Paulo, Brazil will not give up its carrier dream easily.

The Marinha do Brasil is looking at acquiring two 50,000-ton carriers — roughly similar in size to Charles de Gaulle and China’s Liaoning — with U.S. or European assistance. But it will be an expensive and time-consuming process.

Fortunately, Brazil won’t have trouble finding fighters to launch from a future carrier. Brazil is in the process of receiving sophisticated Gripen fighter jets from Sweden. And Saab, the Gripen’s manufacturer, has touted the possibility of developing a future carrier-launched Sea Gripen if it can find a buyer.