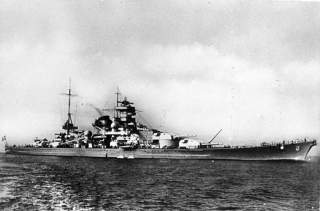 The Treaty of Versailles drastically limited the size of the postwar Kriegsmarine, precluding Germany from owning any dreadnought battleships. The Germans could keep (and replace) pre-dreadnought vessels of ten thousand tons or less, roughly the size of a heavy cruiser in most navies. Presented with this problem, German engineers developed a novel solution: they designed the pocket battleships, warships of relatively small size (twelve thousand tons or so, pushing treaty limits), with relatively heavy armaments (two triple eleven-inch turrets) that could outrun or outgun any potential foe. The pocket battleships were designed as commerce raiders, not as main line units, but could still outfight enemy heavy cruisers.

In 1933, the new Nazi government was preparing to rearm on land and at sea. The Kriegsmarine realized that building additional pocket battleships would serve no compelling purpose. Initial designs for new ships simply enlarged the pocket battleships, adding more range and armor. Over time, however, the necessity for a heavier armament (and consequently larger size) became apparent. The Nazi government also needed time to negotiate the Anglo-German Naval Agreement, which allowed new battleship construction. Laid down in 1935, the first two ships of the new era of German naval expansion became the fast battleships Scharnhorst and Gneisenau, named after a pair of crack armored cruisers destroyed at the Battle of Falkland Islands.

The Scharnhorst class would abide by the basic restrictions of the Washington Naval Treaty, displacing thirty-one thousand tons, carrying nine eleven-inch guns in three triple turrets and making thirty-two knots. Like most German battleships, Scharnhorst was under-armed for its size. The German eleven-inch gun was a very effective weapon, with a high rate of fire, but it lacked sufficient punch to seriously endanger enemy battleships. The designers built in the capability for re-equipping Scharnhorst with fifteen-inch turrets, but the opportunity for conversion never emerged. The ships also carried a secondary armament of twelve 5.9-inch guns.

Scharnhorst entered service in January 1939. A raiding cruise in November 1939 led to the destruction of the British merchant cruiser Rawalpindi. In April 1940, Scharnhorst and Gneisenau were assigned to help cover the German landings in Norway. On April 9 they engaged the British battlecruiser Renown. Despite the German gunnery advantage, Renown scored early hits on Gneisenau, and successfully drove the German battleships away.

The Kriegsmarine planned a massive naval operation for May 1941. Scharnhorst and Gneisenau would depart from Brest and lead the Royal Navy to the south. In the meantime, the newly commissioned Bismarck, accompanied by the cruiser Prinz Eugen, would enter the Atlantic through Denmark Straits and wreak havoc on Atlantic convoys. Bismarck, being a battleship, could deal with the older British battleships used to escort convoys. Unfortunately for the Germans, RAF attacks on Brest disabled the facilities and prevented Scharnhorst and Gneisenau from sortieing. Bismarck’s cruise was famously unsuccessful.

Scharnhorst remained at Brest for the rest of 1941, but increased RAF bombing attacks made the German naval presence untenable. The German ships could not sortie, and could not remain in Brest. The Germans developed a risky plan in which Scharnhorst, Gneisenau, Prinz Eugen and six destroyers would dash up the English Channel, hopefully avoiding British surface ships, aircraft and submarines, in an effort to make it to Wilhelmshaven. The plan worked beautifully, and the German fleet escaped with only minor damage. The dash was a great embarrassment to the Admiralty and the Royal Air Force.

Scharnhorst remained at Kiel for most of 1942. In early 1943, it proceeded to Norway with Prinz Eugen (Gneisenau had been badly damaged by an RAF attack on Kiel, and would not return to service). While in Norway, Scharnhorst operated as part of a “fleet in being” with Prinz Eugen, Tirpitz (the sister of Bismarck) and other ships. These vessels threatened British convoys to Russia, inducing the convoys to occasionally disperse (making the easy prey for U-boats), and forcing the Royal Navy to keep assets in the area.

On Christmas Day 1943, Scharnhorst departed Norway in an attempt to catch a British convoy. Unfortunately for the Germans, the Royal Navy received intelligence of the German movements, and dispatched a task force to intercept. Three heavy cruisers encountered Scharnhorst shortly before 10 a.m. on December 26, and engaged in running battle that resulted in damage to both sides. Unbeknownst to the Germans, HMS Duke of York was also on a course for intercept. A fast battleship of the King George V class, Duke of York easily outgunned Scharnhorst, and had better radar. The British battleship detected Scharnhorst around 4:30 p.m., and opened fire just before five. Scharnhorst withstood several shells before a lucky long-range hit reduced its speed, at which point the British cruisers and destroyers closed to make a torpedo attack. The German ship capsized and sank at 7:45 p.m. on December 26. Thirty-six men from the crew of 1968 were rescued.

Scharnhorst was one of the world’s most famous battleships, but its strategic impact was limited. The Kriegsmarine never threatened Royal Navy control of the North Atlantic, and German surface raiders never approached the lethality of their undersea cousins. The German could have used Scharnhorst and the rest of the surface fleet more aggressively, but then several efforts at aggressive action ended badly. It’s also unclear how Scharnhorst would have fit into the “Plan Z” fleet that Hitler and Raeder contemplated on the eve of war.