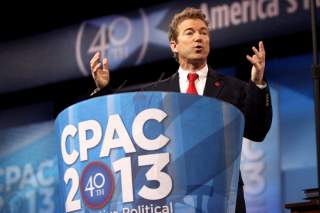 Rand Paul wrote an op-ed for the National Review last week to criticize the Obama administration’s handling of recent violence in Israel.  The senator’s argument was that President Obama should act decisively to cut off all aid to the Palestinian Authority in order to show solidarity with Israel and influence events in the Middle East.  Properly understood, though, Paul’s piece was hardly a clarion call. On the contrary, it was part of a long-term and incremental campaign to win over the U.S. public to the cause of non-interventionism in foreign policy.

Rand Paul stands for a light global footprint for the United States.  Costly wars of choice, expansive networks of overseas bases, generous handouts to foreign leaders—none of these serve the interests of the American people according to Paul.  On the specific question of overseas aid, Paul is on record as calling for such programs to be abolished—including U.S. aid to Israel.

If Paul had his way, foreign policy would command a much reduced budget, require a significantly smaller military establishment (at home and abroad) and would involve precious little money being allotted to America’s allies.  The U.S. would be involved in far fewer military operations—whether large or small—and the nation would be meticulous in drawing distinctions between core national interests and problems which properly belong to other countries.  To coin a phrase, America would “come home.”

The rub is that Paul’s brand of foreign policy is a tough sell domestically, especially in GOP circles.  The U.S. military is highly valued by American society, regarded as a source of national pride and—in many parts of the country—regional economic growth and much-needed employment.  The public and their leaders fret about external threats such as terrorism and nuclear proliferation, and look to the military for protection.  If credible, the accusation of being weak on national security has the potential to torpedo any would-be presidential bid—Rand Paul’s prospective run for the White House included.

In this context, Paul’s latest op-ed can be considered an exercise in what political scientist William Riker called “heresthetics,” the political art of persuasion and manipulation.  Namely, Paul’s heresthetic was to link cuts in overseas aid (to the Palestinians) to a clear-cut national security objective—that is, weakening Hamas, a terrorist organization.  Such a presentation of the issues makes intuitive sense to voters, especially those with strong beliefs about U.S. obligations to Israel, because it couches Paul’s longstanding policy preferences for a slender foreign policy in overtly hawkish terms.  “Cut aid, hurt terrorists, and protect America and its allies,” Paul is effectively arguing.

Last year, Paul adopted a similar strategy when opposing the Obama administration’s use of drones.  Then, the political move was to connect the issue to drone strikes—a foreign policy issue—to extant domestic-political concerns over civil liberties.  Again, the overall goal was to convince domestic audiences that activism abroad is not something abstract but rather something tangible, a set of government policies that have real effects and, in fact, are inimical to voters’ self-interest.  The implication—then as now—was that a slender foreign policy would serve the American people much better than the status quo.

“Some say my position is too hard-line, too strong,” wrote Paul in his op-ed.  In fact, very few people say such things of his foreign policy stances.  Instead, the political burden that Paul grapples with is that of persuading the electorate that his vision for American foreign policy is something that can actually deliver material goods: safety, security, prosperity.  Between now and 2016, Paul will continue working to assemble as broad a coalition as possible in favor of his foreign policies.  His political task will be to continue convincing disparate domestic constituencies—one by one—that their material concerns can be advanced through non-interventionism and restraint.  That challenge is a tall one, but it is one that Paul shows little sign of giving up on.