Senior US Navy Official: Navy Plans to Ask for Fleet Size Increase by 2020 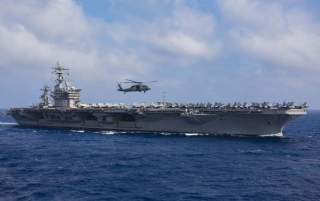 The Navy will  ask Pentagon and Congressional leaders to support a significant increase in the size of its fleet as a way to meet fast-emerging threats and changing demands, senior service officials told Scout Warrior.

Navy officials explain that a formal analysis would be needed prior to any formal request to increase its overall fleet size above and beyond the current plan to reach 308 ships by the end of the decade.

“In order to be good stewards of taxpayer funds, we need want to make sure that when we go over to the Hill (Congress) to have those conversations – we need to have that analysis that shows that we need more.  That is what we are going to do within the next year,” a Navy official told Scout Warrior.

Senior Navy leaders, including the service's Pacific Commander and many others have consistently said the number of ships, submarines, aircraft carriers and amphibs is massively insufficient to meet the current demands of combatant commanders around the globe.

Earlier this year, Chief of Naval Operations, Adm. John Richardson, told lawmakers the service was beginning a formal study designed to examine the possibility of increasing the size of the fleet in order to address a fast-changing threat environment.

While Richardson did not indicate what results the analysis might yield, he did say the service may very well need a new force structure alignment. A Navy official familiar with the effort said the new assessment will likely be reflected in the 2018 defense bill budget submission expected early next year.

“I've directed that we open -- recommission -- we restart a study. We take a look at -- you know, what are the current warfighting demands -- the current demands -- the missions that we are tasked to achieve, take into account the updated threat environment and look forward to delivering that new force structure assessment,” Richardson told lawmakers.

When discussing the need for a fleet analysis, Richardson cited a range of current concerns which include the pace of Chinese naval modernization, a resurgent and aggressive Russia in or near both the Black Sea and Baltic Sea, ongoing operations in the Persian Gulf against ISIS and an unforeseen calculus of potential emergent threats which are not yet known. Along these lines, a 2014 Congressional report estimated that China's Navy is on track to be larger than the US Navy by the mid 2020s.

“The way that we do that (address threats) is by virtue of a force structure assessment, which examines the combatant commanders' needs -- you know, the needs -- the warfighting needs, and the theater campaign plan needs. It's really an aggregate of trying to figure out the demand signal,” Richardson said.  “The last time we did that for the whole force was in 2012, and we refreshed it in 2014. But -- you know, back then, we did not have a resurgent Russia, we did not have ISIL (ISIS) to contend with. The Chinese challenge was a -- in a much different place.”

During the Regan years, the Navy grew to more than 500 ships, nearly double the services’ current fleet size which is approximately 285 ships.

A close look at the Navy’s shipbuilding plan shows the service will decommission more ships in the next five years than it will commission. This is happening, in part, because some of the many ships added during the Reagan build-up, such as the Los Angeles-class submarines and Aegis cruisers, are now beginning to retire, analysts have said.

Many lawmakers and analysts have consistently called for a signifcantly larger Navy, citing the Cold War naval posture. However, proponents of a smaller Navy have made the point that today's ships are far more capable and technologically advanced compared to those of decades ago, precluding the need to match the Reagan-era in terms of sheer size. Nonetheless, service officials do say the current threat environment is such that the service will likely seek an increase above the current plan to hit 308 ships.

Another problem with the current ship-building trajectory is that, while the service plans to have 97 Large Surface Combatants in 2022 – the number drops all the way down to 82 by 2045, according to the shipbuilding plan.

In 2010, an independent panel of experts examined the 2009 Quadrennial Defense Review and told the Senate Armed Services Committee that, given the range of anticipated threats, a 346-ship Navy was their recommendation.

These challenged cited in 2010 have indeed continued to get greater as Navy combatant Commanders consistently report an inability to meet request due to a limited amount of assets.

For instance, Navy and Marine Corps officials explain that the greater use of amphibious assault ships is likely as the Marine Corps continues to shift toward more sea-based operations from its land-based focus during the wars in Iraq and Afghanistan.

With this trend as part of the equation, Navy and Marine Corps leaders are quick to acknowledge that there is a massive shortfall of Amphibious Assault Ships across the two services. Service leaders have said that if each requirement or request for amphibs from Combatant Commanders worldwide were met, the Navy would need 50 amphibs.

Senior Navy leaders have told Scout Warrior that the Navy currently operates only 30 amphibs and plans to reach 38 by the late 2020s, a number well short of the 50 needed to complete current operations.

Rep. Randy Forbes, R-Va., Chairman of the HASC Seapower and Projection Forces Subcommittee, has said that the Navy was able to meet 90-percent of the combatant commander's requirements in 2007, a number which wound up dropping to nearly half in future years.

Forbes, who has authored several op-eds recently about the growing importance of seapower and force projection in coming decades, is concerned that there may be a budget shortfall when it comes to allocating funds needed for shipbuilding.

In a special written statement to Scout Warrior, Forbes called the Navy's analysis a "welcome" development.

If the Navy does request a substantive increase in fleet-size, its implementation will largely hinge upon several factors including budget dollars made available by Congress and whatever the next Presidential administration's position is on the issue.