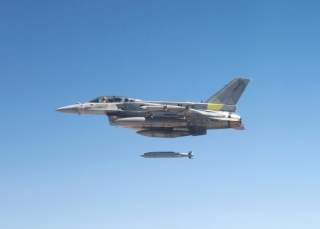 The Navy has finished test and evaluation of a new fighter-launched weapon which will soon deploy as a new air-launched, precision-guided missile able to use a two-way data-link to identify and destroy moving targets at sea, service officials said.

The new technology will give fighters such as the F/A-18 Super Hornet a vastly increased attack envelope against a wider range of threats such as enemy ships, small boats and submarines on-the-move.

While historically used as a land-attack weapon launched from air-platforms such as fighter jets, new technology allows the JSOW weapon to use the LINK 16 data-link to identify and kill moving maritime targets at sea from ranges as far at 70-miles, Navy officials told Scout Warrior.

“The JSOW C-1 Moving Maritime Target capability allows the weapon to fly to an updated cue from its controlling platform, then transition to an image recognition/matching process enabled by an onboard database of ship characteristics stored in the weapon (database selected in mission planning or in the cockpit),” Navy spokeswoman Lt. Amber Lynn.

The JSOW C-1 is the only variant currently in production, and is an upgrade to the JSOW C Unitary variant which uses an autonomous Imaging Infrared seeker with Automatic Target Acquisition for terminal guidance, she added.

Having nearly completed Operational Test, the JSOW C-1 anticipates Initial Operational Capability, or IOC, by the end of March 2016. Once operational, the weapon is likely to deploy on fighter platforms shortly thereafter.

The JSOW C-1 can even change course in flight if needed, and adjust to a changing or fast-moving target, Lynn added. In this respect, the new JSOW C-1 variant has some similarities with its predecessor, the JSOW C which can only hit stationary targets.

“One of the first Networked Enabled Weapons, the JSOW C-1 has a datalink capability that allows a controlling or targeting platform to provide updated targeting information in flight.  These Inflight Target Updates facilitated via Link-16 enable greater weapon accuracy and enhance the probability of mission success,” Lynn said.

The existing JSOW C variant, which can be programmed from the cockpit, is able to fire against a wide range of fixed targets such as enemy buildings, bunkers, air defenses, equipment or troop locations.

“The weapon (JSOW C) has a pre-planned mode where mission planning is used and then also a target of opportunity mode where, if an aircrew needed to change targets in flight, a pilot can select a new target or incorporate third-party target location,” Ron Jenkins, Director of the Precision Standoff Strike Mission Area, Raytheon, told Scout Warrior in an interview.

Jenkins added that both variants of the weapon are engineered with an anti-jam technology, radio frequency countermeasures and an ability to tailor its trajectory or impact depending upon the disposition of a target. For instance, the weapon can be adjusted to destroy a hardened concrete bunker, he added.

“It does have a very robust GPS anti-jam capability and it also has waypoint navigation, which would enable operators to navigate around a threat. In addition to that, you can select the direction of arrival and the angle. For example, if you were going against a hardened bunker, you would want a steeper dive.”

While much of the details of this are not publically available for discussion, both JSOW variants are engineered with what’s called advanced “survivability” technology, meaning they are very difficult to shoot down, Jenkins added.

Moving forward, the JSOW C-1 can be fired from F/A-18 Super Hornet aircraft as well as the Navy’s carrier-launched variant of the Joint Strike Fighter, the F-35C.

The development of this new JSOW C-1 weapon is entirely consistent with the Navy’s emerging “distributed lethality” strategy which aims to better arm the fleet with offensive and defensive weaponry to better address near-peer threats at sea.

“The maritime moving target offensive capability falls right in line with the Navy’s ‘distributed lethality.’ If you look at the current aircraft carrier fleet, you can bring an additive offensive capability that the JSOW C 1 brings to the maritime environment, particularly regarding the effect of offensive anti-surface warfare,” Mark Borup, JSOW business development manager.

Borup also said other ships in the Navy fleet might be able to embrace and integrate JSOW C 1 on other platforms across the service, an initiative which would expand the attack envelope from the service and help better “distribute” its “lethality.”

“This will bring a whole new dimension to warfighting at sea,” Borup added.