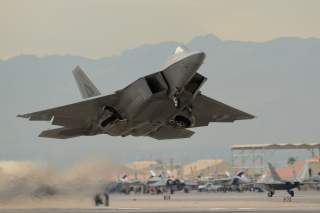 Several prominent leaders in the national defense community are calling upon the Pentagon to re-start production of the high-speed F-22 Raptor stealth fighter jet which began air attacks against ISIS targets in Iraq and Syria.

The F-22's recent performance in combat missions for Operation Inherent Resolve over Iraq and Syria have led observers and analysts to emphasize the importance of the fighter.

The OPED argues that the Pentagon needs to resurrect production of the Lockheed-Boeing-built Raptor or replace it with a new aircraft with comparable capabilities; Forbes is the current Chairman of the House Armed Services Committee’s Seapower and Projection Forces Subcommittee and Wynne served as Secretary of the Air Force from 2005 until 2008.

“Raptor incorporated cutting-edge technologies that had never been combined in a single aircraft: composite materials, computer avionics, thrust-vectoring engine nozzles, and radar countermeasures. It became the first “fifth generation” fighter, a high-speed, super-maneuverable stealth aircraft that still outclasses everything else in air-to-air combat,” the OPED writes.

The Air Force had originally planned to build more than 700 F-22s, however ongoing wars in Iraq and Afghanistan inspired new, more immediate thinking regarding the global threat calculus – leading the Pentagon to ultimately truncate the fleet sized down to only 187 jets, the OPED says.

The move was part of a Pentagon culture fostered by former Defense Secretary Robert Gates wherein developers were suffering from what he called “next-war-it is” and not sufficiently focused upon the pressing needs on ongoing ground wars.

“By the time the Raptor started rolling off the production line in 2002, the high-tech threats it had been designed to defeat had faded from view. Instead of Russian MiGs, Pentagon leaders were worried about improvised explosive devices,” the essay writes.

Writing that the U.S. Air Force’s fleet is the smallest and the oldest it has ever been, Forbes and Wynne point out that Russia and China have been developing, fielding new fighters and, in some cases, and exporting sophisticated air defenses to countries like Iran.

“Russia rolled out its first fifth-generation stealth fighter, the PAK-FA, in 2010. China followed in 2011, flight-testing the J-20, an F-22 look-alike, while Secretary Gates was visiting Beijing. Gen. Mark Welsh, the Air Force’s chief of staff, warned last year that future Russian and Chinese jets “will be better than anything we have today,” Forbes and Wynne write.

Air Force officials have explained that, as much as the service may want more F-22s in the fleet, the money to build them again would most likely need to come from elsewhere in the budget.

As evidence of the current Air Force position on the issue, the service’s Military Deputy for Acquisition Lt. Gen. Arnold Bunch, recently told Congress that restarting F-22 production would require billions of dollars.

Bunch cited a recent Rand study on the issue, explaining that the service was no longer analyzing the possibility due to budget realities.

“We viewed it, in the light of the balancing act we're already doing between readiness and modernization, as something that would be cost prohibitive and we would have to take something else out that we value right now to try to meet the requirements to be able to do that. And so we have not put any further analysis into that,” Bunch said.

On this topic, however, the Forbes-Wynne letter cites the Rand study’s finding that it would cost over $500 million (in 2008 dollars) to restart production on the F-22.

“If the Air Force ordered 75 additional jets, Rand estimated they would cost $179 million each,” the letter states.

If lawmakers were somehow able to increase the budget or secure the requisite funding for additional F-22s, it certainly does not seem inconceivable that Air Force and Pentagon developers would be quite enthusiastic.

Inside the F-22’s Mission in Iraq

Air Force F-22 Raptor fighter jets delivered some of the first strikes in the U.S.-led attacks on the Islamic State in Iraq and Syria, when aerial bombing began in 2014, service officials told Scout Warrior.

"An F-22 squadron led the first strike in OIR (Operation Inherent Resolve). The aircraft made historic contributions in the air-to-ground regime,” Col. Larry Broadwell, the Commander of the 1st Operations Group at Joint Base Langley-Eustis, Virginia, told Scout Warrior in an interview.

“Air superiority, using stealth characteristics is our primary role. The air dominance mission is what we will always do first. Once we are comfortable operating in that battlespace, our airmen are going to find ways to contribute,” Broadwell explained.

“Because of its sensors, the F-22 is uniquely able to improve the battlefield awareness - not just for airborne F-22s but the other platforms that are airborne as well,” he said. The Raptor has an F-22-specific data link to share information with other F-22s and also has the ability to use a known data link called LINK 16 which enables it to communicate with other aircraft in the coalition, Broadwell explained.

“The addition of SAP mapping has certainly enhanced our air-to-ground capability. Previously, we would have to take off with pre-determined target coordinates. Now, we have an ability to more dynamically use the SAR to pinpoint a target while airborne,” Broadwell added.

Overall, the Air Force operates somewhere between 80 and 100 F-22s.