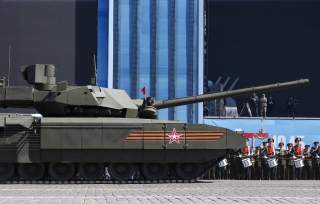 The Russian military announced on Oct. 30, 2017 that it will begin acquiring the Nerekhta — a ground-combat robot armed with a slew of remotely-operated weapons such as machine guns and rocket launchers.

Col. Oleg Pomazuev, the head of the Russian Ministry of Defense’s Department of Innovation Research, said the Nerekhtas “managed to prove themselves well at the Alabino testing ground,” and that the robots exceeded manned combat vehicles “in a number of parameters.”

The spartan-looking, mid-sized Nerekhta comes in three varieties — combat, transport and artillery reconnaissance – and can be equipped with a 12.7-millimeter or 7.62-millimeter machine gun, as well as a 30-millimeter AG-30M automatic grenade launcher.

The Russian Ministry of Defense views such machines as an important way to amplify the army’s combat power. Robots can go where human beings cannot.

Russia is in fact testing many unmanned ground vehicles, from small devices to tank-sized models equipped with a variety of ammunition. Going into 2018 and beyond, the Russian military will start acquiring more unmanned military systems for its air, land  and naval forces.

The past few weeks have seen several significant developments in Russian unmanned military systems, from government hints at how such systems could operate to announcements about new concepts and prototypes.

The Russian military establishment has dropped several mentions about the implementation of artificial intelligence in combat. On Nov. 1, Viktor Bondarev, chairman of the Federation Council’s Defense and Security Committee, stated that artificial intelligence will be able to “replace a soldier on the battlefield and a pilot in an aircraft cockpit.”

He further indicated that Russia is pursuing “swarm” technology — also pursued by the U.S. military — which would allow a network of drones to operate as a single unit.

“Flying robots will be able to act in a formation rather than separately,” Bondarev said. “Perhaps, an operator will be sitting on the ground and controlling a whole unmanned squadron with the help of a computer … the day is nearing when vehicles will get artificial intelligence. So, why not entrust aviation or air defense to them?”

Such official statements indicate that Russian military elites are contemplating the use of artificial intelligence in military settings in the future with a level of comfort about the idea, in contrast to more cautious and ambiguous statements in the West on the use of artificial intelligence. Bondarev’s statement could pour more oil on the fire of concern expressed by the American military establishment that the race for militarized AI is tightening among the United States, China and Russia.

However, despite public pronouncements, unless an actual Russian proof of concept is tested, there is no cause for alarm, especially when the Russian military is so far following in American and Chinese footsteps in developing unmanned aerial vehicle swarms and manned-unmanned teaming concepts.

He indicated that “drones are (already) effectively used for conducting aerial reconnaissance, engineering support, electronic warfare, communications, and as part of target acquisition missions,” referring to the successful use of unmanned aerial vehicles in Syria, where Russian forces flew 16,000 UAV sorties for a total of 96,000 flight hours.

Shoigu further stated that Russian use of its UAV fleet grew by 2.5 times since the start of its Syrian operation in 2015, from 400 to more than 1,000 monthly flights. Shoigu also indicated that Defense Ministry boards will hear proposals to increase the use and development of unmanned aircraft.

Such UGVs will be designed to deliver ammunition to troops on the battlefield, support special forces snipers, and, if necessary, help retrieve the wounded. Such concept UGV platforms “will combine the latest robotics developments and achievements, with the help of organizations specializing in navigation technologies, control systems and technical vision,” the FPI stated.

While qualitative and quantitative gaps still exist between Russian and Western military robots, Moscow is nevertheless incorporating such technologies in its armed forces. However, Russia’s own ability to square its desire for high-tech military products with budgetary and economic realities will be a much greater and accurate indicator of the country’s unmanned ambitions.