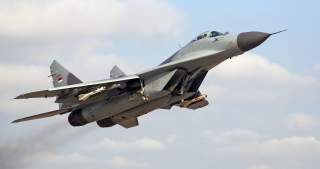 However, while technologically backwards and often lacking the level of proficiency of Western air forces (with pilots often receiving fewer than 20 annual flight hours), the KPAAF does have a few strong points. As with many North Korean facilities, most KPAAF air bases are hardened to withstand air attacks and the country has a large number of aircraft available.

“The North Korean Air Force (NKAF), a fleet of more than 1,300 aircraft that are primarily legacy Soviet models, is primarily responsible for defending North Korean air space,” reads a Pentagon report to the Congress on the state of North Korea’s military in 2015. “Its other missions include SOF insertion, transportation and logistics support, reconnaissance, and tactical air support for KPA [Korean People’s Army] ground forces. However, because of the technological inferiority of most of its aircraft fleet and rigid air defense command and control structure, much of North Korea’s air defense is provided by surface-to-air missiles (SAMs) and antiaircraft artillery (AAA).”

The North Koreans have only a handful of modern aircraft—the most capable of which are Pyongyang’s fleet of 35 or so Mikoyan MiG-29 Fulcrums. Other relatively modern planes in Pyongyang’s inventory include 56 MiG-23 Floggers and 34 Sukhoi Su-25 Frogfoot close air support aircraft. However, the overwhelming majority of Pyongyang’s arsenal is made up of 1950s and 1960s vintage machines.

The North Koreans also have roughly 20 Mil Mi-24 Hind helicopter gunships, but increasingly as Pyongyang’s conventional capabilities are falling behind, the hermit kingdom is focused on special operations forces (SOF). “The NKAF operates a large fleet of An- 2 COLT aircraft, which are 1940s vintage single-engine, 10-passenger biplanes, likely tasked with inserting SOF into the ROK [Republic of Korea],” the Pentagon report states. “The Air Force is rounded out with several hundred helicopters that would be used for troop transport and ground attack, including predominantly Mi-2/HOPLITE and some U.S.-made MD-500 helicopters obtained by circumventing U.S. export controls in 1985.”

While old, the An-2 is one still an effective SOF support machines due to its low radar cross-section, ability to fly low and slow under the radar and rugged construction. “North Korean SOF are among the most highly trained, well-equipped, best-fed, and highly motivated forces in the KPA. As North Korea’s conventional capabilities decline relative to the ROK and United States, North Korea appears to increasingly regard SOF capabilities as vital for asymmetric coercion,” the report states. “SOF may be airlifted by An-2 COLT or helicopters (and possibly Civil Air Administration transports), moved by maritime insertion platforms, or travel on foot over land or via suspected underground, cross-DMZ tunnels to attack high-value targets like command and control nodes or air bases in the ROK.”

Thus, while admittedly primitive, North Korean air forces cannot necessarily be written off. If led by a clever commander, they might still be able to do some damage in a conflict they have been training for decades to fight.