Showdown: Trump Is Putting the Squeeze on China in the South China Sea 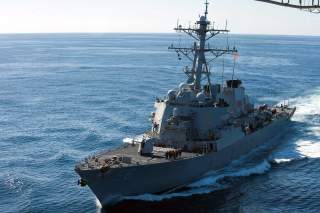 The Trump administration is stepping up pressure on China in a low-key campaign of increased naval activities aimed at undermining Beijing’s vast territorial claims over the South China Sea.

The US guided-missile destroyer USS John S. McCain on Aug. 10 sailed within 12 nautical miles of the disputed Mischief Reef – a key political battleground in the ongoing rivalry over whether the strategic waterway remains open international waters or becomes a Chinese lake.

The destroyer passage through the Spratlys Islands – China insists on calling them the Nansha Islands – is the third freedom of navigation operation conducted during the first seven months of the new US administration. It was the second passage near Mischief Reef since May and highlights what the Pentagon regards as one of the more strategic islands that China has been militarizing and potentially threatening American military ships and aircraft that eventually will be deployed to Philippines.

During the previous administration of President Barack Obama, freedom of navigation operations were curtailed sharply in a bid to avoid upsetting China. The result has been that China continues to claim some 90% of the South China Sea and has been built up more than 3,200 acres of islands in both the Spratlys and further north in the Paracels.

Then, over the past two years, Beijing has begun militarizing some of the islands, including Mischief Reef, with runways and short-range missile emplacements that the Pentagon has warned could eventually be used by China to deploy long-range anti-ship cruise missiles.

The Pentagon’s annual report on the Chinese military warned about the Chinese buildup, both in the South China and East China Seas. “China continues to exercise low-intensity coercion to advance its claims in the East and South China Seas,” the report to Congress made public in June says. It called Beijing’s tactic in the sea a “timed progression of incremental but intensifying steps to attempt to increase effective control over disputed areas and avoid escalation to military conflict.”

The Chinese in the Spratlys are focusing on a triangle of islands that defense officials say will provide a key strategic foothold allowing military control over the sea. They three islands are Mischief Reef, Subi Reef and Fiery Cross Reef. All have long runways capable of handling warplanes and other military facilities.

“As of late 2016, China was constructing 24 fighter-sized hangars, fixed-weapons positions, barracks, administration buildings, and communication facilities at each of the three outposts,” the report said.

Now the Pentagon under Defense Secretary Jim Mattis has begun pushing back in a bid to reassert international access to the waterway.

In another move designed to blunt China’s takeover of the sea, Mattis announced two days before the latest warship passage that a US aircraft carrier next year will make a port call in Vietnam – a nation that is vying with China for control of the Parcels.

Without mentioning China by name, Mattis said after meeting with Vietnamese Defense Minister Ngo Xuan Lich that the two militaries would deepen defense cooperation in dealing with regional security challenges.

Retired US Navy Capt. Jim Fanell said the new American approach has begun to reverse eight years of policies that undermined US credibility and commitment to protecting Asian Pacific security. “The Trump team’s increase in freedom of navigation operations within the South China Sea and the recent announcement of a US Navy aircraft carrier port call to Vietnam are clear indicators of the return to when the US led by example,” Fanell said.

“It will be no easy task to correct course from the past eight years of failed rhetoric and empty promises, especially since the [People’s Republic of China] has filled much of the vacuum with its new naval and air stations in the Spratly Islands and its increased naval and air force presence throughout the entirety of the South China Sea.”

“That said, I remain very optimistic that a return to normalcy by the new administration will have a positive impact in blunting Beijing’s military expansionist agenda,” he said.

China reacted to the destroyer operation by sending its own warships to shadow the McCain and said the American destroyer’s action was carried out without Chinese authorization.

“China has indisputable sovereignty over the Nansha Islands and its surrounding waters,” the Foreign Ministry said in an unusually long statement. The Chinese said the ship violated Chinese and international law and endangered the lives of “front line personnel.” Beijing vowed to protest the ship passage.

The Foreign Ministry went on to accuse the United States of undermining the efforts of the Association of Southeast Asian Nations to resolve the disputes in the sea and noted support for the ASEAN code of conduct during the recent meeting of foreign ministers in Manila.

“The US provocation also forced the Chinese side to take measures to further enhance the national defense capability,” the ministry said.

As with two earlier operations in the sea, the Pentagon again declined to comment on the latest naval operation. American defense officials said the public silence is part of a new policy aimed at playing down what will become regular warship passages.

John Tkacik, a former State Department official who specialized in China affairs, said the idea of keeping quiet about the warship passages is a good idea.

The former State Department official said the new administration is debating military and diplomatic options but needs to develop a “lawfare” option – the use of international legal mechanisms, like the recent UN Permanent Court of Arbitration ruling against China and in favor of Philippines maritime claims.

Still, the challenge of reversing Chinese militarization of the South China Sea remains formidable. “China’s establishment of permanent all weather, typhoon-proof naval bases in waters to which the international tribunal has ruled China has no legal claim, is a ‘possession is nine points of the law’ situation, and it is henceforth impossible to reverse that,” he said.

Tkacik said the Permanent Court of Arbitration ruling should give the Trump administration new energy to declare frequently and loudly that the South China Sea is not now and has never been China’s sovereign waters.

Also, the newly created Chinese islands should be declared as not having gained sovereign territorial sea under the Law of the Sea treaty.

“In short, while the current US legal position is that China’s man-made islands in the South China Sea are illegal and without territorial seas significance, the United States has been timid in articulating that position,” Tkacik said. “It is now incumbent upon the State Department to state its legal objections to China’s actions.”

Bill Gertz is a journalist and author who has spent decades covering defense and national security affairs. He is the author of six national security books, including iWar: War and Peace in the Information Age.