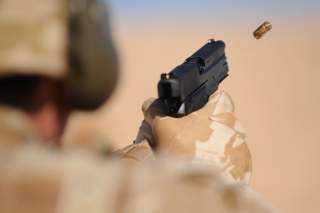 Sig Sauer, the maker of the 9mm P320 semi-automatic pistol that the Army recently contracted as the brand-new M17 Modular Handgun System, is looking to spread some of that mil-spec love to civilians by making a handful of those new military-grade sidearms available for commercial purchase, according to Military.com.

While the P320 has been available on the civilian market since 2014, the company will offer up a cache of just 5,000 military-grade M17s that, so far, the soldiers who first fielded the sidearm on Nov. 28 claim they can’t get enough of.

“We are planning to do a limited release of about 5,000 of the Army variant of the M17 for the commercial market,” Tom Taylor, the chief marketing officer and executive vice president for commercial sales at Sig Sauer, told Military.com. “The timing is not finalized yet, but it looks to be late spring.”

The commercially-available version of the full-size M17 will be nearly identical to the Army-issued pistol, though the handguns won’t come with the “anti-tamper mechanism for the striker action” or  special coatings on the handguns innards to “maintain lubricity under harsh conditions,” Military.com reports. There are some customization options, though: the M17s will be available with or without the  thumb safety mounted on the frame that’s standard with the Army-issued variant, depending on the buyer’s preference.

But more importantly, each commercially available M17 will have its own serial number (for those who want to live out some kind of perverse gear accountability fantasy), a matching coin, and a letter of authenticity from Sig Sauer’s CEO, which will help you flaunt the fact that, yes, you shelled out your hard-earned cash for the real thing.

How much each handgun will cost, however, is still up in the air. “It’s high in demand, but if we price it too high, they will say ‘I really want it, but it is just too expensive,” Taylor told Military.com

In January, it was announced that Sig Sauer M17 beat out versions of the 9mm Glock 19 and .40 caliber Glock 23 pistols in the Army’s Modular Handgun System Competition. In doing so, Sig Sauer won the Army’s 10-year $580 million contract to provide as many as 238,000 M17s to replace the tried and battle-tested M9 Beretta 9mm handgun as the branch’s sidearm of choice.

Though the other services are keen to get their own modular handgun, it’s unclear if they’ll follow in the Army’s footsteps. The Air Force, for its part, is currently putting the handgun through ejection seat tests to see if the M17 would be a suitable replacement for the its current issue of Beretta M9s and Sig Sauer P226s as a sidearm for pilots.

“We just wanted to make it really special,” Taylor said of the special sale. ”And once they are out there, the owners will be privileged to own the actual gun.”