For Some Senators, Politics Doesn’t Stop at the Water’s Edge. 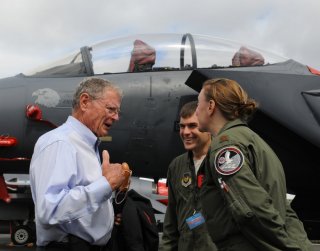 “President Barack Obama is hopelessly naïve, has failed to articulate a well-thought-out strategy to defeat the Islamic State in both Iraq and Syria, and is tying the U.S. military’s hands by slashing the defense budget at the same time that U.S. soldiers are ordered to save the world. The administration is drastically underestimating the threat that ISIL poses to the safety of Americans, and the president has purposely “insulted” the men and women in uniform when he said that no U.S. combat boots will be deployed to Iraq—despite the very fact that 1,600 troops are already in Iraq serving in dangerous environments.”

If you think this is an overly partisan statement, you would be absolutely right. These are the words (I’m paraphrasing, obviously) that Sen. James Inhofe, the top Republican on the Senate Armed Services Committee, used as the focal point in his opening statement at a committee hearing last week. The topic of discussion, as titled in general terms by the Armed Services Committee, was “U.S. Policy Towards Iraq and Syria and the Threat Posed by the Islamic State of Iraq and the Levant.” It’s perhaps the most serious national security topic that the Obama administration, the Defense Department, and the State Department are dealing with—enough to elicit a fifteen-minute, prime-time national address by the president of the United States.

Inhofe’s remarks, however, reveal the dilemma that the White House is in: whatever they decide to do, there is always going to be someone in Congress (usually a proud conservative Republican) that is either unhappy with the strategy that has been formulated or upset that more firepower is not being used to—in the president’s own words—“degrade and destroy” the Islamic State.

President Obama, of course, is not the only Commander-in-Chief that has had to juggle with this problem. Even before the Monica Lewinsky scandal that almost destroyed President Bill Clinton’s career, congressional conservatives repeatedly questioned his gravitas as Commander-in-Chief. After the loss of eighteen U.S. servicemen in the dusty streets of Mogadishu, Somalia, in October 1993, Clinton’s approval ratings on the subject were horrible. Clinton’s successor, President George W. Bush, was hounded by Democrats (and eventually some Republicans) when the Iraq war turned from a “Mission Accomplished” moment into a quagmire that appeared to have no end in sight. That criticism never left the Bush presidency entirely, and it eventually contributed to a Democratic victory in the 2008 presidential elections.

What seems different in Obama’s case, at least from this author’s vantage point, is that nothing the president does on national security appears enough for the opposing party in Congress—many of whom have no foreign-policy experience themselves and tend to use issues of national security as a convenient way to discredit the Democratic Party during a midterm-election season (and by the way, Democrats do this too when they are in the minority). Not all Republicans are like this: Senator Bob Corker has been relatively pragmatic as the ranking member of the Senate Foreign Relations Committee, and when he criticizes the administration, it’s usually on legitimate policy grounds. Even John McCain and Lindsey Graham, the two biggest hawks in the Senate today, have been willing to support President Obama when they thought he was embarking on the right path (McCain and Graham provided the administration with crucial support in December 2009, when Obama announced the Afghanistan troop surge).

Yet if 2009 was a honeymoon period when Democrats and Republicans could at least cut across party lines on matters of national security and foreign policy, 2014 is a year where no one seems to get along and people are content with questioning one another’s motives. Sen. Inhofe’s opening statement is a case in point:

“[A]irstrikes can only be fully effective, especially in the urban areas ISIL is entrenched in, when paired with the skills of a trained air controller on the ground. But the President already ruled out boots on the ground. There was a collective sigh of relief at ISIL Headquarters in Raqqa [Rah-Ka], Syria, when they heard him say that.

We should ask the pilots dropping bombs over Iraq whether they think they are in “combat” - pilots who face the real threat of having to eject over ISIL held territory.

I’m not advocating for an army division or combat elements on the ground. But it is foolhardy for the Obama Administration to tie its hands and so firmly rule out the possibility of air controllers and special operators on the ground to direct airstrikes and advise fighting forces. It sends the wrong message to our troops, to the enemy, and to partners.”

To Inhofe’s credit, he didn’t criticize the president’s strategy without offering an alternative of his own—deploying U.S. special operators, he argued, will be a critical element if the U.S. Air Force is expected to pinpoint ISIL locations accurately without excessive civilian casualties.

But why add the comment that President Obama is boosting ISIL’s morale by dismissing the deployment of U.S. combat forces? And why suggest that the Commander-in-Chief is insulting the very same people he is ordering into Iraq? Is it the sheer partisanship that everyone talks about obsessively? Is it language that is especially conducive to an election year?

Whatever the answers may be, it is hard to say that all of this helps the country unite in what Defense Secretary Chuck Hagel has acknowledged “will not be an easy or brief effort.” Perhaps I’m being overly sensitive. Or perhaps the old adage “politics stops at the water’s edge” is truly dead for some members of Congress.