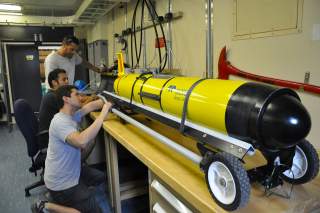 In the wake of the Chinese seizure and return of the U.S. Navy glider in the waters of the Western Pacific, U.S. Navy officials have made it clear they plan to continue and broaden the range of such data-gathering missions with the relatively affordable but sophisticated underwater drones.

“We have approximately 130 of these gliders and they are relatively inexpensive,” Rear Adm. Tim Gallaudet, Oceanographer of the Navy and commander, Naval Meteorology and Oceanography Command, says in a blog released soon after the Chinese seizure.

“The U.S. Navy will not only continue to use these technologies to improve our knowledge of the oceans, but we will be significantly increasing our use of gliders over the coming years so that our understanding of the ocean is the best in the world,” he says. “My goals for this program include expanding the current use of gliders, enabling the Fleet through the use of gliders and ocean models, and accelerating development and deployment of newer systems.”

Why does the Navy use gliders? “Only 5 percent of the world’s oceans have been explored,” Gallaudet notes. “These underwater robots allow us to explore more of the ocean, and faster, at a fraction of the cost of a manned submersible or a ship. The information gathered allows us to better predict ocean currents, density, sea states and tides which the U.S. Navy needs to safely and effectively operate all around the world. Once deployed, a glider can persistently sample the ocean for months freeing the ship to perform other functions.”

While some have represented the gliders to be cheap and disposable, but they are complicated unmanned underwater vehicles the Navy, researchers and industry have been developing for some time. The first generation of underwater gliders was developed with funding from the Office of Naval Research (ONR), starting in the mid‐1990’s and mostly through the talents of academic institutions or small closely associated businesses. The Navy was using ONR-supported underwater gliders by 2004 in fleet exercises, establishing the Littoral Battlespace Sensing-Gliders (LBS-G) as a program of record in 2010. The service has been using the gliders operationally since 2012.

Modular in design and buoyancy-driven the gliders can collect oceanographic data for up to four months without the need for active propulsion. The drones are made by Teledyne Webb and are sold commercially, Gallaudet points out.

The ocean glider caught and released by the Chinese is a Slocum G2, Navy officials say.

From the underwater drone concept’s inception, according to Navy and contractor officials, a priority was given to developing a small, rechargeable and efficient li-on battery as well as the necessary algorithms and display tools to aid in glider deployment and routing for visualization and adaptive sampling. They also need to find low-frequency sound sources for navigation and tomography – a method to display a cross section through a solid object using X-rays or ultrasound.

Such a reliable, robust and long-term data collection capability means little, though unless the glider goes where the operators want it to and can transmit the information back, so program developers also needed to develop common glider user interface, control programs and common data formats.

All if this is packed into a nearly 5-foot-long torpedo with wings.

The drones’ flight software includes autoballast functions that adjusts to balance the dive or climb ratio within desired drive value as well as providing for speed control that can override the autoballast to maintain desired speed. It also has a low-power mode that reduces processor-cycle intervals to manage energy usage.

Teledyne drones also include acoustics modems for command and control and to transfer data for transducers that handle depths thousands of meters beneath the sea.

However, subsurface communications, program officials, can be limited by frequencies and conditions with constrained bit-rate operations.